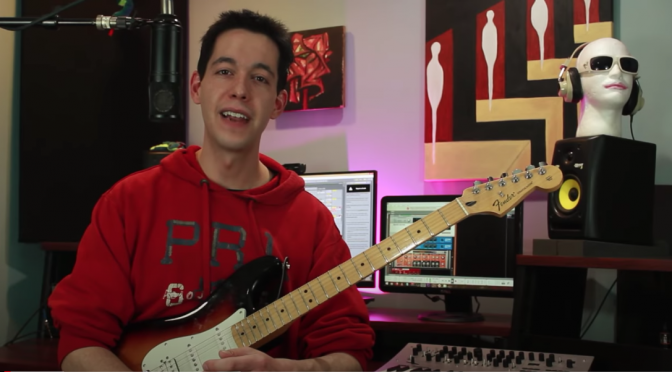 Jake Lizzio’s YouTube channel offers lessons and videos on music theory, scales, modes, chords, songwriting techniques, and song analysis with a focus on guitar. It is seriously one of the best and most accessible channels on the platform. Our Signals Music Studio Review.

If you’re anything like me, then you’ve probably spent more hours of your life that you’d like to admit sitting in front of the numerous tutorials and video courses on YouTube. It’s fair to say that the quality varies. Most do nothing more than prove to us that teaching, online or otherwise, is not as easy as probably seems. You watch a few videos over a brief period of time and, for whatever reason, the presenter may offer some basic insights, but inevitably fail in keeping you captivated despite their passion for the subject.

And then there’s Jake Lizzio, a man who looks like he’s still at school, but with the voice of a seasoned middle-aged newsreader. He could be 17, he could be 45, I’ve no idea. But in all the years I’ve been watching this kind of thing, I cannot remember somebody who is such a natural communicator on what can be an incredibly complicated and tricky subject.

Whether he’s teaching a simple guitar riff or talking about the construction of a Mixolydian improvisation, he flows in such a way that not only do you follow what he’s saying, you’re still listening to him a dozen videos in. With the aid of some slick editing and clever use of graphics, I’m not exaggerating when I say that his channel is probably the best collection of music education videos on YouTube today.

Although he does have a great deal of content for the beginners, it’s fair to say that you’d probably get the most out of this channel if you have at least a foundation in theory or playing an instrument. That’s not to say that you won’t get anything if you don’t. Lizzio’s obvious knowledge and experience comes across strongly seemingly whatever the musical subject. His songwriting tutorials are at a particularly high standard in my opinion. I really don’t recall finding anything quite like it in terms of depth and explanation anywhere else on the platform. The way he walks you through complete original compositions, step by step, is really very engrossing and clever.

He also has a strong Patreon community. Here you’ll find PDF versions of sheets, posters and notes to go with his videos, as well as extra videos, lessons and jam tracks.

Then there’s the ‘Ultimate Model Poster’ which he describes as an entire music course crammed into one chart. This can be ordered for a very reasonable $20. Featuring hand-crafted visuals from four artists, the educational poster displays the modes of the major scale and their diatonic chords, as well as guitar charts and suggested chord progressions.

So, the conclusion of our Signals Music Studio Review? All in all, for such a relatively new channel (he started it in 2017), this is a comprehensive collection of interesting and highly valuable videos. Music theory, songwriter and many other aspects of musical education. I cannot recommend this channel highly enough.