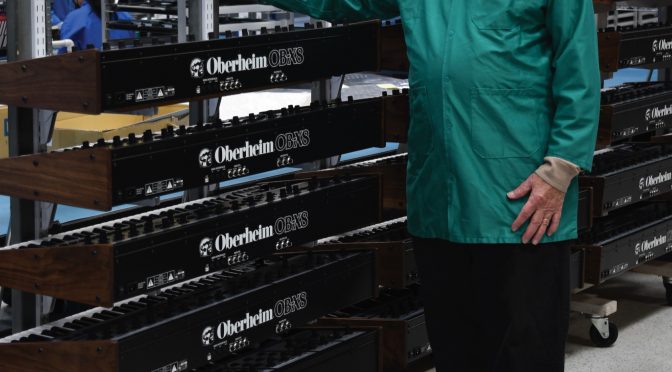 Oberheim today began shipping the OB-X8: an eight-voice polyphonic analog synth that combines the classic sound and key features of the legendary OB-X, OB-Xa, and OB-8 products from the 1980s – including all of the original presets that gave them their signature sounds.

“It’s an exciting day for Oberheim and for musicians that have been anxiously waiting for the OB-X8 since we first announced it,” said company founder Tom Oberheim. “Naturally, we’re proud to reintroduce the Oberheim sound in a new instrument. But even more, we’re proud that we’ve been able to combine the voice architectures of the various original OB series synths in a way that gives players unique new sounds and capabilities that even the originals didn’t have. It’s an amazing-sounding instrument.”

The catalog of artists associated with the original OB-series synths is long, and includes innovators like Prince, Eddie Van Halen, Jimmy Jam, and Herbie Hancock. For many, it was much more than just an instrument; it was part of their signature sound and a key part of the musical tapestry of the 1980’s and beyond.

Oberheim alumni Marcus Ryle, who was deeply involved in the design and execution of the OB-X8, summed up the new synth: “As a whole, the OB-X8 covers more sonic territory than any OB-series synth ever created. The Oberheim team has delivered an instrument that will satisfy even the most die-hard Oberheim fans — and introduce an entirely new generation to the incomparable Oberheim sound.”

Oberheim CEO David Gibbons added: “Bringing back Oberheim and creating the new OB-X8 has been a true labor of love. Even more gratifying is the overwhelmingly positive reaction we’ve received from both artists and the music industry as a whole. Everyone is excited about this instrument — and nobody more than us.”

Oberheim brings its products to market with the help of the Focusrite organization and renowned synth maker, Sequential.

The OB-X8 eight-voice analog synthesizer is available now with a US MAP of $4,999.

Oberheim is the 21st century return of the legendary company that helped fuel the electronic music revolution. Now, just as then, Oberheim is guided by the vision of engineer and inventor, Tom Oberheim. Tom’s genius for innovation introduced the world to the first commercially available poly synth and other groundbreaking electronic instruments that literally changed the sound of music. Today, Oberheim reawakens this legacy by bringing the famed Oberheim sound to a new generation of instruments and artists. The company’s passion remains unchanged by time or technology — to once again provide the world with the finest-sounding analog synthesizers ever made. Oberheim brings its products to market with the help of the Focusrite organization and renowned synth maker, Sequential.