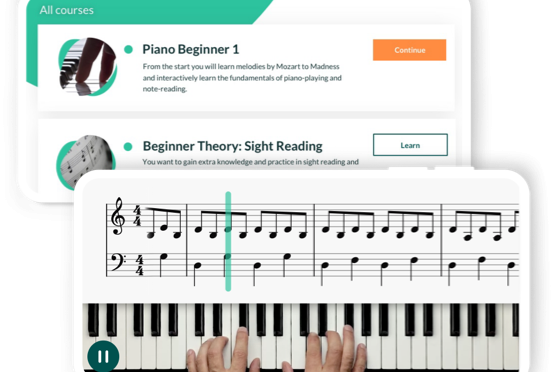 The F minor chord is a wonderful, darker sounding triad that is commonly found in a number of popular songs and classical favorites. Learning to master the F minor chord is a basic skill on piano that will broaden your repertoire of chords, deepen your understanding of music theory and harmony, and allow you to access more new and exciting sounds.

In this article, we will explore all the basics of the F minor chord including how it is built, how we play it on the piano in both hands, some chords that are related to the F minor chord, and some common chord progressions that use F minor. When you are ready, dive in!

What is an F minor chord?

How is a minor triad different from a major triad?

As you can see, major triads and minor triads are simply the opposite of one another! Pretty cool, right?

How to play an F minor chord

The F minor chord looks like this on the piano:

Each triad has three basic positions: root position, first inversion, and second inversion. The basic triad we learned above is in root position, meaning the root note is the lowest sounding note of the chord.

To make a first inversion triad, all you need to do is make the third (the middle note) the lowest sounding chord. A first inversion F minor triad is spelled A♭ – C – F.

To play the chord with your right hand, place your first finger on C, your third finger on F, and your fifth finger on A♭.

To play the chord with your left, place your fifth finger on C, your third finger on F, and your first finger on A♭.

There are seven chords in the key of F minor:

You may also notice that F minor is the relative minor of A♭ major. Understanding the concept of relative minor and relative major is another great shortcut you can use when you learn how to play piano to easily jump between key centers and manipulate chord progressions much faster.

F minor is a great chord that you will see all over the place. Some common piano chord progressions with an F minor chord are:

Add to your chord mastery

F minor is a great chord to add to your library of piano chords. Understanding how minor triads work, how you can build them, and the related chords to F minor will open new doors and allow you to access new sounds and songs. It is always a worthwhile idea to add to your knowledge of chords and music theory.

Skoove is full of lessons on chords, repertoire, and music theory. Whether you favor pop hits or are more interested in exploring classical favorites or brushing up your skills with chords and theory, Skoove offers great lessons for every student. Check it out this week!