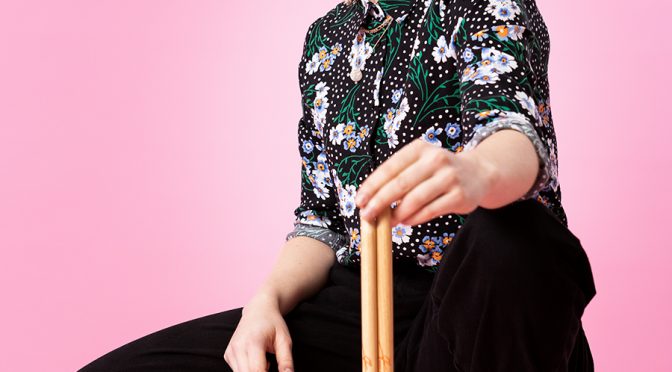 Anika Nilles is definitely part of the ‘new breed’ of drummers coming through to prominence in the new century.

Although Anika did not start playing drums professionally until she was twenty-six, she has forged a highly successful career earning a number of prestigious awards along the way, including ‘Rising Star’ for two consecutive years in Drum! Magazine, and Modern Drummer’s ‘Up And Coming Artist’.

Since then, Anika has become highly sought after for sessions and tours, as well as being an influential educator and clinician.

After her performance at The UK Drum Show, Anika got together with Andy Hughes to discuss her career, kit choice, and future plans.

You started playing drums at six years old, what was your inspiration?

It was my dad. He had a band, and they used to rehearse in our basement at home and I used to watch them play. I can’t actually remember when I started to play the drums, but I think the desire to learn to play came from just a natural instinct. I think drumming is just in our family – my dad and other family members are drummers – so I started to learn and my dad showed me some initial grooves.

As an award-winning musician, do you analyse what it is about your playing that makes you so admired by the drum community?

I can honestly say I have no idea. I started off putting my videos out on social media and the first two videos went viral. I started to get a lot of attention from drummers, kit manufacturers, bands, and musicians, but I honestly didn’t really know what was going on. It’s interesting because people tell me what they like or admire about my playing, my style, but it’s not possible for me to see what they see. When you are inside something looking out, you can never have the same view as someone who is outside looking in. When I write a piece of music, I live with it for a long time, forming and shaping it, changing things around, taking bits out and putting bits in, and finally it is ready to be heard. So I can never hear it as someone who is hearing for the first time hears it, although that would be interesting.

You have your own band now, Nevell – did you never fancy joining an established band when you were learning to play?

I did play with bands until I became a professional player. I always played in a couple of bands at the same time, usually playing original music. Now I do play with other artists – I do occasional studio sessions and I do tours – but nothing permanent because I have my own band and I am very much focused on that project at the moment. For me, it makes sense that as I am writing original music I want to play with my own band.

Does your band take up a lot of your time?

It does because as well as writing the music and working on that with the musicians, I do all the administrative stuff as well for tours and recordings, so that does take up time, but I do enjoy being in charge of everything.

As the main composer for Nevell, is it hard to step outside your ‘drummer head’ to work on material for other instruments?

It was at first, but I now play different instruments myself and when you play it is much easier to understand how things work for musicians who play those instruments. Even so it is quite difficult to step outside my instincts as a drummer and work melodically, but like everything else it develops with experience. Because my band are permanent, and we work together a lot, it becomes easier to know how they guys play – what will work for them – and to write to their strengths.

Are there plans to bring Nevell over the UK to play?

I do hope so. I am hoping we can look at coming over maybe in spring next year. At the moment I am looking at some autumn dates for the band in Europe, throughout Germany and Scandinavia and maybe one or two dates in France. I have a variety of things going on, but the autumn is Nevell time.

What’s your next project outside your own band?

Well, I am going out on a UK and European tour with Jeff Beck, which I am hugely excited about. Jeff is an amazing musician and a great guy to work with, so I am really looking forward to my tour with him.

Which kit are your playing at the moment?

I am working with Tama. I had an idea in my mind of how I wanted my kit to sound, I think most drummers have that, and I was in touch with several companies and trying their kits to see what would work for me. The thing is, I hear other players working on kits by other companies, and they sound wonderful, but their sound is not mine, and that means that the drums they use would not give me the special sound that I want, the sound that I can hear. Tama have the sound I was looking for and I am pleased because they were my first choice when I started looking. We have established a wonderful relationship, they are like a family, and I am so pleased to be working with them.

Will you be taking your Tama kit on tour with Jeff Beck?

Absolutely! I will have my personal kit flown over to the UK so I can use it here, and then it will go to Europe with the rest of the band’s instruments for the European gigs. Rental kits are fine for one-off shows like The UK Drum Show here, but for anything more, I like to use my own kit. I have got to know it, I know how to tune it exactly how I like, and I have got into the feel of playing it. That means a lot on tour because I like to feel comfortable with my drums each night, and you can’t do that with a rental kit, there isn’t the time to get into it properly. So my kit will be coming over here, and then to Europe with for the shows, and then back home again.

Who are your drum heroes?

Jeff Porcaro was a massive influence on me, well, Toto as a whole, and certainly his playing which I love. I also love JR Robinson, who has played on so many fantastic albums with so many artists. I saw my first drum clinic when I was ten or eleven, and that was JR and he was such an inspiration. Another player I really love is Adam Deitch who is huge in hip-hop drumming, I love his style as well.

Do you have a favourite drum?

I have a weakness for aluminium snares, I love the dry crisp sound they make. My favourite is the Tama Star Reserve, that is a fabulous drum. I think almost all drummers love their snares best, it’s the heart of the kit, and I am no different.

What are your practice routines?

I am very disciplined in my practice routines. I plan out my practice routines on paper a year in advance. That means that if I go out on a tour for two or three weeks, when I come back, I know exactly where I am with my practice schedule because it is all noted. I have my specific technical goals to work on, and around them, I fit learning the pieces I need to know either for my band, or for any sessions or any touring commitments. But the practice plan is always there ready and waiting for me.

You have a big presence on social media. Would you recommend that for drummer starting out in the business?

I cannot say no, because the early part of my career was built up with my social media profile and presence. But it’s so much harder now because there is so much more stuff out there, and it gets busier literally every day. But really, being a musician is about connecting with other musicians and bands, and working with people, playing with them, interacting, exchanging ideas, and finding what you want to do with your life as a drummer. A social media presence can be a good thing, but it is not the only thing, or the most important thing – that is playing music in various situations. Social media may help you get something going, but it is not going to make your career for you, you have to do that yourself with your playing.