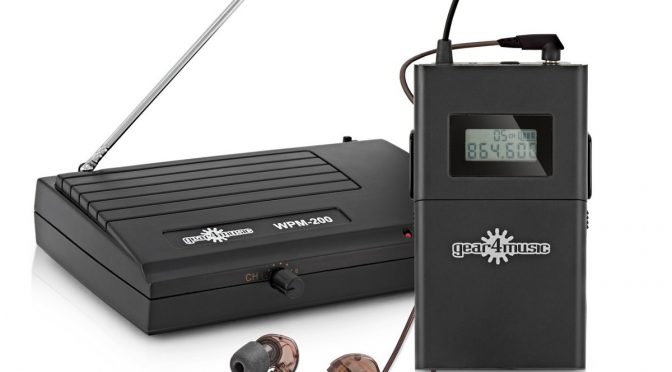 It’s always a little disconcerting when there’s a product that seriously undercuts all others. Surely, it’s going to be no good? Well, when it comes to wireless in-ear monitor’s we have the Gear4Music WPM-200. At a little under £70, it’s worryingly affordable. But does it work?

The short answer? Yes. However, there are obviously areas where compromises have been made. We’ll look at each of the components – the transmitter, the receiver, and the headphones in turn to find where they are.

Firstly, we have the transmitter and yes, as soon as you pick this up, you immediately feel the cheap oozing from it. It weighs almost nothing and the low-quality plastic covering doesn’t fill you with confidence. The controls are simplistic. There’s an on/off button and a 6-way frequency dial on the front, and a jack and power input on the back. But, at the end of the day, it does what it’s supposed to do and transmits. Yes, it doesn’t feel as if it would take a lot of abuse, but the transmitter generally just sits to one side by the desk and doesn’t see much action anyway.

Secondly, we move on to the receiver. Now, thankfully, this does seem much sturdier, and that’s just as well. This is the part of the Gear4Music WPM-200 that will attach to you after all, and depending on your energy, of course, will take the most abuse. We have some metal coverings here, and the whole unit feels reasonably well built and dependable.

The controls are again simple though. We have an on/off switch on the top, but rather than the clunky plastic button on the transmitter, we have a smaller flat button that needs holding down to activate. There are other simple small rubber buttons for the channel selection and volume up and down. These three are located behind the front case, which is a nice touch. It means that the volume or channel can’t accidentally get knocked when you’re in full flow.

Finally, there are the headphones. Again, this is an area where money-saving has definitely been applied. They work. That’s about all you can say really. They come with a few different rubber ends, so they are comfortable, and the hook-shaped design means they stay in place. However, they are again, obviously cheap. Very little bass response, a lack of clarity in the sound and distortion at high volumes.

Is the Gear4Music WPM-200 Worth Buying?

At £64.99 at the time of writing, despite the drawbacks, the answer is an emphatic yes. When all is said and done – they work. And you’d be looking at paying at least double that for anything else. The transmitter transmits, and the receiver receives. There is no noise, and the claimed range of 40m does appear to be relatively accurate. I’ve used them in a very large hall with multiple rooms, which I can travel around in without losing signal.

The headphones leave a lot to be desired admittedly, but for this price range, you could easily spend another £20 on headphones and still be half the price of other products.

All in all, are they worth the money? Yes. Do they work? Yes. Are there compromises? Yes. But if you want an in-ear wireless monitoring system without spending hundreds of pounds, then the Gear4Music WPM-200 is exactly what you need.