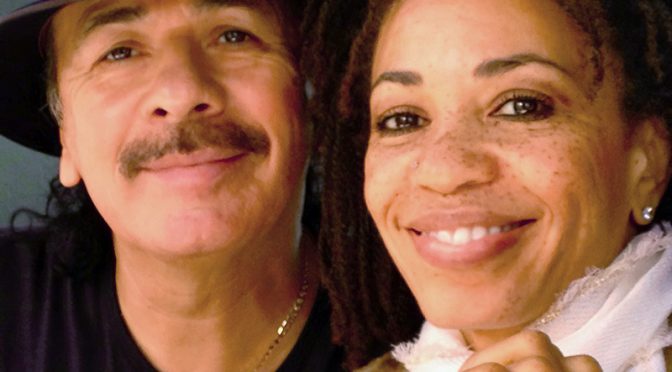 Cindy’s roots are firmly in jazz, but she rocks with the best of them – as her tenure with Lenny Kravitz’s touring band, and her occupation of the Santana touring line-up drum throne since 2013, demonstrate.

On a warm September morning, at her Hawaii home, Cindy chats with Drummer’s Review Andy Hughes about the making of her latest record, and her ongoing passion for drums.

It must have been tempting to stay in your comfort zone of jazz for this record, but its main strength is its diversity and wide appeal.

It was difficult to choose which tracks to keep, and which to leave out, yes. I wanted the album to tell stories, the experiences I have had in life and love and because we did record a lot of music, some didn’t make the cut, but they will come out on future records. It’s always better to have material to choose from, and tracks left over for another day, than to be scrabbling around looking for that final song to finish the record.

How often do you plan to record; do you have the next record scheduled yet?

Well, I don’t have anything scheduled yet, we will see what the reception is like for this album first. If it’s received with as much love as we put into it when we were making it, that will be fine, but I do plan to have another album out as soon as scheduling permits.

What was the input into the album from (producer) Narada Michael Walden and your husband Carlos Santana?

Well, both individuals are amazing, and incredible at what they do, they have so much experience between them. Nada (Narada’s nickname) was awesome to work with. I was really just starting out with putting my vocals on my record, and he has so much experience because he was worked with so many wonderful vocalists in his career. He knew exactly how to guide me and encourage me, he would make suggestions as we went along, and he knows how to direct vocal sessions, he was a pot of gold to me. In terms of co-writing, it was great to work with someone who hears songs in the same way that I do, he hears melodies and he loves them. The drum sessions were really easy as well because Nada is a drummer so we speak the same language. So much of our work together as drummers is intuitive, it makes life so much easier and such a pleasure.

Carlos has so much music in his head, he listens to stuff all the time and he has this mental Rolodex of music in his mind, so he knows moods and textures and he is great for suggestions and guidance. When we are home away from the studio, we still discuss things, talk about ideas and so on. Some things we leave in the studio because that’s where they belong, but we are musicians, it’s who we are and we don’t hide that, so we always talk about ideas for songs and arrangements and so on.

How did you discover that your voice was good enough to provide the vocals on your album?

Mainly from people who heard me. I used to sing around the house when I was growing up and my mom would always say I had a nice voice, but she would say that, she’s my mom! She’s always going to encourage me, that’s what moms do. When Carlos and I got married, I would sing around the house, as I always have done, and one of our favourite things to do is go for a drive in the car and listen to music and sing along to stuff. Some of my favourite music is Miles Davis’s Quintet from the 1960s’s and I know just about all the solos and I sing along with them. Carlos would tell me that I should sing properly, and I thought he was being nice, like my mom, but he kept on telling me so I knew he meant it. Carlos is too much of a lover of music to disrespect it, he would never encourage me just to be kind because I am his wife.

I demo’d a song back in the 1990’s that I had written with the idea of another vocalist recording it. I actually wanted Ronnie Isley to sing it when we when were working on the Power Of Peace album. Ronnie said it wasn’t suitable for him, it was a woman’s song, and a woman should sing it, which I was OK with because a woman wrote it, so that was the perspective. Ronnie suggested loads of singers, but Carlos said I should sing it, and he recommended that I sang it for Narada Michael Walden. Nada liked it, and said he wanted to produce me, and that led to us writing together and I knew I needed some help with my vocals, and my sister advised me of a coach who lives in another city, so we had Skype lessons together and that was really helpful, and Nada would advise, and it went on from there.

Singing took me out of my comfort zone, it was a challenge, but I have really enjoyed doing it.

Which drum kits did you use to record your album?

I have two Gretsch kits which I used for the Las Vegas sessions and that was all the instrumental tracks for the album, plus Dance Party and Evolution Resolution. The kits are Solid Show kits and they have a beautiful warm tone. Paul Cooper at Gretsch made the first one for me and he liked it so much he made one for himself. I took it on the road with me for the Lenny Kravitz tour in 2014 – 2015 and I worried about what I would do if anything happened to it, so Paul made me another kit and I based that in L.A. and that was the kit I used for the Las Vegas sessions for the album. The tracks Nada produced were recorded at his studio, and I used a vintage 1970’s Gretsch kit there. I took my Istanbul cymbals to both sessions and I used my standard DW hardware as well.

Do you like to experiment with drum sounds, or do you pretty much have an idea of the sounds you want for each track?

I didn’t try out too many sounds to be honest, I usually have an idea in my head of what I want the sound to be. I had a Black Beanie snare for the Vegas sessions which has a beautiful sound and again I played that on the Lenny Kravitz tour, and I also used a Gretsch Chrome Over snare. For most drummers, the snare is the heart of the kit, and for jazz drummers, the ride cymbal is vital, the ride is the main thread that ties everything together.

Do you stay current in terms of new technology in kit manufacture?

I try to, yes. I am very content with Gretsch, but I also like to know what is out there. If I heard about something that I liked from another company, I would approach Gretsch and ask if they could make me something along similar lines, but to be honest, that hasn’t happened yet. I am interested in what people are doing with different metals for rims and so on. Gretsch are wonderful, I am very happy with them, but yes, I do listen out.

Do you have personal input into the designs for your drum kits?

I do yes. I discuss things like bearing edges with Paul Cooper and he will always advise me on what is going to be best for my playing. I love the tone control mufflers that Gretsch make, they used to be standard but they aren’t any more so if ever a drum came to me without the tone control mufflers, I would have to send it back and have them put on.

Are you a neat freak? Do you like all your drum sounds to be perfect on stage or in the studio, or will you let something go if the overall feel is right?

I am a stickler for the right sounds, I always want the sounds I can hear in my head. I always have my drum sounds sorted before I get to the studio or before I go on tour, and then I just do a little tweak here and there before I start to play. I check my drums have not lost tuning, and right before I play, I check that my snare feels and sounds right.

In terms of perfection, I am more concerned that feel is right. If the intention comes through, and there is a slip, I’ll let it go because overall the feel and the atmosphere is what counts. You have to capture the moment, and if ninety-nine people get the feel and one person hears the slip, probably because they are a player, then I’ll live with that.

Have you had to make adjustments to your playing style to incorporate singing as well? It’s not an easy thing to adjust to is it?

No, it’s certainly not! It is a new skill for me and I am learning, and I have found out that being a drummer who sings and plays, you have to be calm. You need to have the right amount of breath to keep the pitch and keep the note as full and as steady in quality as you can. Of course, you can’t sacrifice the drum sound either, but honestly, if it came to a choice, I would let the vocals go a little, nothing would ever make me compromise my drums!

Obviously, the recent restrictions have been very hard for all musicians to deal with – are you looking forward to getting back to playing live?

Absolutely! I can’t wait. Everyone I know has projects backed up because their plans were all put on hold. Santana had a summer tour of the U.S. with Earth Wind And Fire which we were really excited about, and we are re-scheduling that for next summer, so that is something we are really looking forward to right now. I also have plans to take my own band on the road, so we are looking at scheduling for dates there, but obviously we can’t plan in detail until we know we can make the travel arrangements, so we are waiting and hoping, like everyone else.