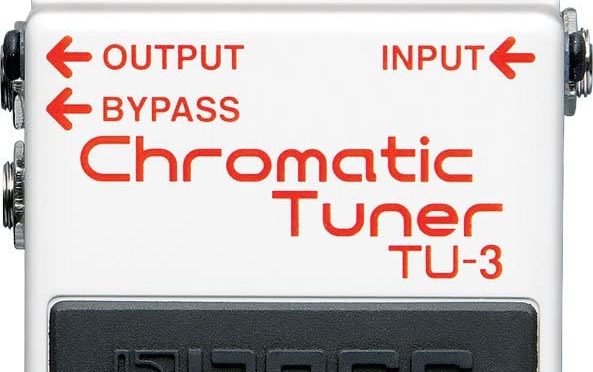 The Boss TU-3 Chromatic Tuner Pedal is the standard torch-bearer when it comes to compact-size digital tuners.

Since Boss introduced the first digital tuning pedals in the early 1980s, they have been seen as the benchmark for the devices, and with good reason. Anyone who has owned a Boss stomp pedal will attest that the things are generally bomb-proof. Built to last, my own personal TU-3 has now done hundreds of gigs. And apart from a few small cosmetic dinks is going as strong as ever.

The TU-3 is the latest generation of their tuner range, updating the previous TU-2 pedals. These were phenomenal pedals, but the only gripe some had was with their +/- 3 cent accuracy, which was improved to +/- 1 cent with the TU-3.

It has all the standard features you would expect of a tuning pedal. A standard out and a bypass, with a clear and easy-to-read 21-segment LED meter.

Generally speaking, with most pedals you find the setup you like and then leave it, and this is no exception. However, you do have options. The display can be switched between a standard CENT (Central) display, where the ‘needle’ is central when a note is in tune, or STREAM which shows an animated stream which slows down and stops when in tune.

Seeing in the Light

One feature that is extremely useful is the brightness setting – by holding down the STREAM/CENT button for a couple of seconds, you can switch the pedal on to high brightness mode, which is fantastic if you’re gigging in bright sunlight or having to fight the glare of a large lighting rig. This is a simple feature really, but one that really makes a difference.

The TU-3 is a chromatic tuning, meaning it will tune to any note, but you can also set it to Guitar or Bass mode using the MODE switch, which uses string numbering rather than note name, and the same button allows you to drop the tuning up to 6 semitones if required as well, with support for 7-string guitars and 6-string basses. The base frequency can also be changed from the standard 440Hz if required too, in the range 436-445Hz.

The only real issue I’ve been told of is that this pedal, and Boss Pedals in general, can be quite heavy on battery power (especially if using the high brightness mode), but I use a pedalboard mains adaptor personally, and would probably recommend that anyway for regular gigging.

All I can say, after hundreds of gigs with this pedal, is that it truly is the benchmark. At around £60, it is more expensive than some other tuners but is more than worth it.

View other Boss Pedals on Amazon