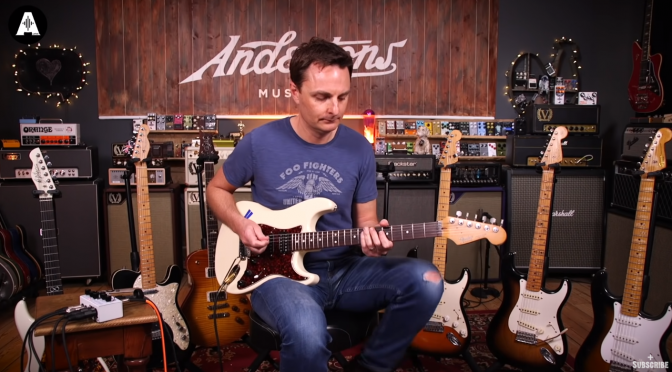 Andertons Music Co. has been a family run business since 1964, so it’s fair to say they know a thing or two about guitars. Their main YouTube channel is dedicated to their own Andertons guitar reviews, as well as effects pedals and amps. They also have separate channels for Keyboard and Drums too.

It’s fair to share that Anderton’s channel is certainly not short of content. Posting new videos almost daily whilst maintaining an impressive level of quality, it’s almost impossible to keep up with everything they put up. But with such a wide variety of offerings, it’s definitely the case that there’s something for everyone.

Their main channel is the guitar channel, which is what we are concentrating on here. However, there are separate channels for other disciplines, links to which can be found on the channel home page. The most common videos you’ll see are product reviews, usually performed by ‘The Captain’ Lee Anderton, alongside other well-known YouTubers. People such as ‘Danish Pete’ Honore, Rob Chapman and Rabea Massaad.

The format of these can be a little samey, but some may like that, in that they generally start with a jam, then a chat of the models, and then an outro jam, though it could be argued that there’s really only a few ways to review a guitar. Captain Lee appears to get some stick regarding his playing in the toxic world of the YouTube comment, which I think is grossly unfair, as he is a very competent player (who is playing with some of the best players on the internet at this time too, let’s not forget), and his knowledge of the products is highly impressive.

As well as Andertons guitar reviews, they have other running series, such as ‘The Captain Meets…’ where Lee meets with often legendary guitarists such as Steve Vai or John Petrucci, as well as a memorable video where he ‘met’ his own father and discussed the history of the Anderton’s brand.

There’s also series for other types of player, such as the weekly ‘Acoustic Paradiso’ focussing on Acoustics, and ‘All About the Bass’ which is, well, yeah.

All in all, it’s a highly impressive channel with an astounding amount of frequent, high-quality content, which has a lot to do with the success of the main Anderton’s business.