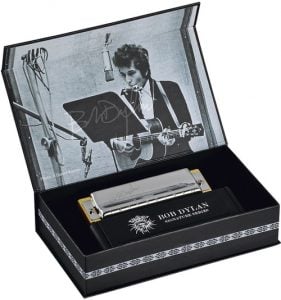 What Harmonica Does Bob Dylan Play?

If you asked the average person in the street to name a famous harmonica player, chances are you’d get one of three answers: Stevie Wonder would probably score highly; older people, especially in the US, might say ‘Junior Wells’; but the most ubiquitous name mentioned would almost certainly be Bob Dylan. The interesting thing about this, of course, is that Dylan is not regarded by many musicians as being a particularly good harmonica player. In some circles, indeed, he’s even regarded as being a terrible harmonica player. So why is is name so inextricably linked with the instrument and what type of harmonica does he actually play?

The link with the harmonica is a fairly obvious one: listen to any of Dylan’s early singles and the instrument forms a prominent part of them – from Mixed Up Confusion through to Subterranean Homesick Blues. It’s not show-off virtuoso solos, but the harmonica complements the songwriting perfectly and forms an integral part of each song – just imagine The Times They Are a Changin’ without the (admittedly simple) harmonica hooks. Conversely, something bluesy and complicated shoehorned in would not add anything; it would only detract from the song.

As for harmonicas, you’ll find for sale various official Bob Dylan Signature Edition harps made by Hohner over the years, but it’s unlikely that you’ll hear these exact instruments on any of Dylan’s recorded material. Rather, almost all of his harmonica work until more recent years will have been done on a Hohner Marine Band. Some enthusiasts take this to mean that the Marine Bands from the 1960s are some sort of mythically great instruments, especially since they were used by almost all of the great harmonica players of the 20th Century, but the truth is much more prosaic; players chose the Marine Band because it was well made, cheap and easily available. There really wasn’t much choice back in those days!

Later in his career, Dylan also used the Hohner Special 20, but it is the Hohner Blues Harp that he is generally associated with now (and which the latest Signature Edition models are based on). The differences between this model and the Marine Band are extremely minimal – they both share the same thickness of reeds (they’re not thinner on the Blues Harps , as some players erroneously believe) and comb material, and it’s only really the shape of the cover plates that differentiates them. I challenge anyone to successfully differentiate their tone in a blind test.

So, if you want to replicate Dylan’s sound, look for a Marine Band or Blues Harp from Hohner. If you’re happy to spend a bit more than these two harps, the Marine Band Deluxe and Crossover offer similar tone and feel, but with more swell-resistant combs. For Dylan songs that require the use of harmonic and natural minor harps, your only real choice is the Marine Band, as most other harmonicas in these tunings feature plastic rather than pearwood combs, which give a slightly different tone.

The post What Harmonica Does Bob Dylan Play? appeared first on The Harmonica Company.