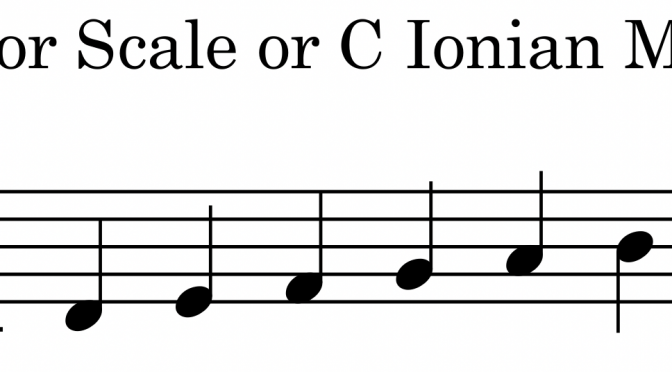 Musicians are often practicing groups of notes played one at a time in order, on their instruments. This is a very common way to develop speed and skill, hand independence and practice playing at slow or fast tempos. These notes musicians are often practicing are called Scales, which are actually called diatonic and chromatic scales. Generally pianists will be practicing the Diatonic Scales of Western Music, focusing on playing them in a specific order of notes. We can also call these natural scales. From these natural diatonic scales we can derive church modes, and diatonic modes. Western Music Theory is full of these concepts.

What is a diatonic scale?

The most familiar scale to you will probably be the diatonic C major scale, which is certainly the most common musical major scale in western music. There are lots of piano scales that will begin on a different note, but what we will do is use the C major diatonic scale to explain concepts of diatonic scales in western music, and how we can use the same combination of whole and half steps to shape diatonic chords, major scales, and church modes.

For thousands of years, musicians have been playing instruments, singing and making percussion sounds to express themselves. This is an almost universal musical experience in every culture, all over the world. Around 800 AD in Ancient Greece musicians started using complex systems in the West to explain and group notes into different orders, and then we began to be able to name them. Interestingly enough the notes were also not instrument specific, so musicians who played piano or sang, or played flute or anything else that was being invented could use these systems to play beautiful music or explain concepts of music theory.

The groups of musical notes we call a diatonic scale or the seven modes, or sometimes also church modes. All of these terms are referring to the same music system that originated from the Middle Ages, using a diatonic system. This article will teach you and explain to you where they originated, how we tell them apart and most importantly how to use them in your own music.

The many diatonic scale piano are built from the same basic concept. Unlike the chromatic scale which uses all 12 notes of the chromatic spectrum, the diatonic scale uses only seven notes. In music theory we will create measurements for a C major scale. A great place to learn how to play this is the best piano learning app.

We start on the note C, and then construct a series of whole steps and half steps above the root note, until we arrive at this series of notes.

This series of half steps and whole steps only uses the white notes of the piano. Our seven notes are constructed using this interval sequence pattern:

The major scale or Ionian mode

You may recognize that interval sequence and the sound of the same notes as other major scales. This is because we actually recognize A major diatonic scale as being the first of our diatonic church modes, we call it the Ionian mode.

The Ionian mode is just another name for the major scale, they are exactly the same. In fact both the major and minor scale are church modes. There are many different modes, but these two are the most common in western music. We can look at C major and use and the white notes of the piano to write out all the other church modes we have. We are staying off of black keys for this example. Play this on your piano keyboard.

The minor scale or Aeolian mode

Only the natural minor piano scale is considered diatonic, because the other forms of minor scale have to alter our original seven notes, often by making changes to the sixth degree or seventh scale degree or leading tone. This scale only uses white keys, so remember this.

A keen eye will see that these two modes are using the same eight notes, just arranged in a slightly different order. This is a tricky part of music theory. If we were to play them on piano starting on the note A, we can play all the white keys up until we arrive at A again, and the order of the white keys actually creates our Aeolian mode. The notes have the same names as in our C major scale or Ionian mode, but actually the sound coming form our piano keyboard will be very different.

The other diatonic church modes

There are all together seven different scale degrees in each group of diatonic church modes, and we can play a different mode just by playing the notes of our major scale or natural minor scale, we just have to start in a different position on the keyboard.

The order of whole steps and half steps will be different because we starting and ending on a different note, but the notes themselves are the same notes as before.

The D Dorian mode – The Dorian mode sounds very minor, and it is what happens when we play our white key scales but we start on scale degree number two. This mode is called the D Dorian mode, and it often is used by jazz musicians to play over minor chords.

The E Phyrgian mode – The Phyrgian mode is an incredibly common sound in Spanish music, and music written primarily for guitar. It is very interesting because unlike most modes, which have a whole tone between the first two tones of the scale, this one begins with a half step.

The F Lydian mode – The Lydian mode is a favorite for musicians who are writing music that sounds like space, or supernaturally confusing.

The A Aeolian mode – A Aeolian is the same as our natural minor scale, as introduced in the previous section talking about the different types of scales that are relative to major.

The B Locrian mode – The Locrian mode is perhaps the most difficult of all modes for beginning musicians to use well. Unlike most major triads, which are built on major thirds and minor thirds, this scale has a flattened second scaled degree and a flat fifth, which means that the perfect fifths built on the first scale degree is flattened.

There are of course scales that do not fall into the diatonic musical modes. These are often scales that use fewer than seven notes, or will have two different seventh degrees. Many of them will be based on repeating small patterns or seemingly extra musical concepts.

Whole tone scale – The whole tone scale is an interesting non diatonic scale, because it can be played starting on any note as long as you only play whole tones. It is a mysterious and also futuristic sounding scale. The Skoove Piano App’s Mystical Moments & Atmosphere Lesson introduces this scale without beginning and without end.

Don’t be afraid to experiment and look up different styles of music which use interesting scales, the more you learn the more you will be able to expand your own ears, and your musicianship.

Learning to play your modes and scales will result in a deeper, more complex, and rich relationship with music and the effect that it has on you. Another incredible way to practice all your scales and modes is with the Skoove piano app, which allows you to create a free trial and use the built in metronome and note recognition to make sure you’re improving every time you sit down to practice.