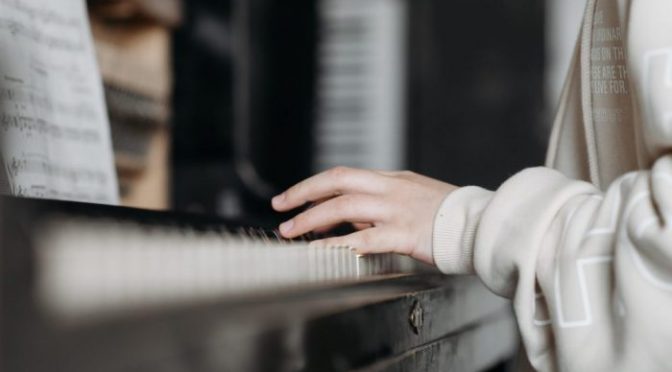 The best part of learning to play the piano is when you can finally find songs to play with simple chords. There’s great joy in playing a fun song with a simple piano arrangement, or looking through simple chord charts and making music. Finding things to play on the piano can be difficult however, because a lot of times you won’t be able to tell if there are just four chords in an entire song. Sometimes a musician can make a guess about how simple a pop song will be by judging on when the song was written, or by using a tutorial video. Instead however, we’ve made a list of five easy pop songs to play, with easy chords to learn: simple left hand chords, and mostly single notes in the right hand.

Even the most absolute beginner popular songs are most likely to include different combinations of notes simultaneously. In music we call these “chords”. The first chord that almost every musician learns on the piano is called the C major chord, and you can play it with either a left hand or a right hand, or a combination of both. From Bruno Mars to Billie Eilish, to John Lennon and Michael Jackson, right hand or left hand, all musicians use piano chords, and piano keys in their music.

No matter which songs you’re learning how to play, the typical combination of chords in the left hand and one note in the right hand will account for most types of piano songs to play. There will be some other songs that may start differently, but understanding how to play the chords is the most important thing for your left hand. Memorizing this will make easy piano chords songs even simpler, regardless of when the when was written. Make sure you know your piano notes before you go any further, right hand and left hand.

No matter how complicated a chord is, they will only ever include two different parts. The “root” and the “quality”. Sometimes the root of the chord might be a flat or sharpened pitch, and sometimes the major chord might have augmented additional keys, but it is these two core principles that allow all musicians to communicate with each other using sheet music, chord charts, and music theory. This is as true for chords as it is for scales such as the blues scale.

For example lets look at a C major chord. The name actually includes all of the information that you need to play the piano version of this chord. The root is the letter attached with the title of the chord. If it is C, the root of the chord is C. This tells us which note alphabetically we need to measure the rest of the notes in the chord from.

Once you know how to spell all basic types of chords, such as major, minor, augmented and diminished, then the amount of songs with easy piano chords you can play will grow tremendously.

The simplest best songs with easy piano chords will be simple easy pop songs, and they will all include chord progressions. These are simple to play on the piano, but they do use different combinations of major and minor chords. By learning our first song first, we can actually cover the most common musical patterns used in easy pop songs. By learning the whole song, you will actually be learning many different songs at the same time.

The Beatles – Let It Be

The Beatles’ Let It Be starts with a simple melody and a very easy C major chord in the left hand. The chords of this song are actually very interesting, and are very popular piano chords for songs. With our tutorial video, you can recognize that actually the chord progression in this song is extremely popular, and you may even recognize the sound of these chords. They’re used by everyone from John Legend to Bruno Mars and Beethoven.

Try and pay attention to the shape of the bass line, and recognize that during the second half of the verse the bass line actually changes. Even though there are only four chords, the bass line will change. This means that the chord progression will change over time, and learning to recognize this will help you read piano sheet music faster.

Elton John’s Rocket Man was a seminal step in his career and this tutorial video will teach you everything. Elton John has been on the cover of Rolling Stone magazine a lot in his career, but of course he is most famous for his piano playing and singing, not just for his relentless fashion. Rocket Man is a song that as soon as you start playing, everyone will perk up!

Of all the easy songs with piano chords, the right hand melody of this one is actually pretty tricky. Remember that the right hand is emulating his voice, not an instrument. Keep track of playing the note one at a time, because the human voice cannot sing multiple notes at a time. Also be mindful of the black keys, as this song uses a lot of different types of chords. Play the chords separately and this will be a huge success!

John Legend – All of Me

Now this song seems like it would be pretty straightforward, but you should make sure to know that the chorus, although a lot of fun to play, is a lot to keep track of. You can search for something to play and sing no longer, because our version will have people mistake the piano for the real thing.

The most important thing for you to learn with this song is to not search for which note is in the melody. Like the other songs in this article, it’s written to be simple and easy for piano but it will still include black keys, because this song is actually heavily featured in the minor key.

This song was certainly the biggest hit of The Righteous Brothers, it is a frequently found result when people search for piano chords with popular songs, but was certainly not as famous as it ended up being until after being featured in the movie Ghost with Patrick Swayzee. While his character did not use his left hand or right hand to play the piano, but instead to interact with the real world, this song has stood the test of time. What a great chorus!

You may ask yourself why is it exactly that an article would feature two different Beatles songs in the same list? Well, apart from the reason that The Beatles were so unbelievably famous in their era and influenced more pop music than any other musicians at the time, the real reason they feature so often in teaching articles is because the music of a song like Hey Jude works as an excellent teaching vehicle. The chords will appear in similar arrangements, or progressions in other pop songs. The chords will also be played in similar voicings from song to song.

Hey Jude was originally written for John Lennon’s son about how he should not feel bad when their parents would fight. Try to play the chords of this song simple and lightly, as if it were a piano lullaby, with the chords dancing delicately. Play the chords as if you were calming someone down with no words, just only music, notes and chords.

Whether the song you’re playing starts on a major chord, or a minor chord, if you have a chord chart of sheet music – you can be grateful that you did the important practice and sat down to learn your actual chord spellings, chord qualities, and chord progressions. Whether the song has easy chords or complex chords, you can be sure that the lessons learned in this article, plus the other exquisite tips on Skoove’s app will lead you to success. Don’t be afraid of a major chord, you know how to play all of them now!