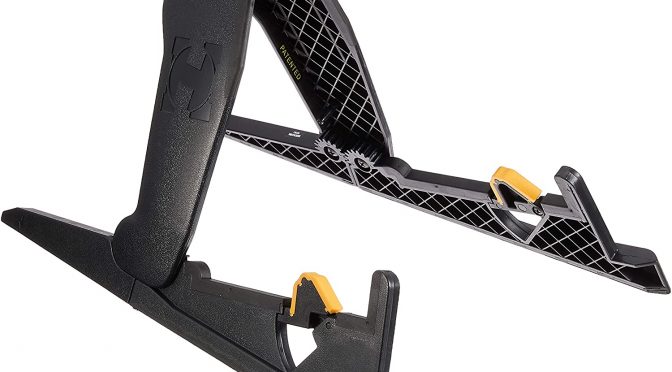 Hercules is a company renowned for producing top-quality stands for all areas of musicianship and the ultra-portable GS200B EZ Pack, for what is it, is no exception. Here’s our full Hercules GS200B review.

It’s fair to say that guitar stands are not the most exciting accessories to talk about, but they are absolutely crucial. The consequences of not having one, or having a rubbish one, can be catastrophic. However, as important as they are, we all know how annoying they can be to transport with their annoying size and shape, especially if you need several at a time.

One solution is the Hercules GS200B acoustic and electric guitar stand. It folds up to a small rectangular shape measuring 11x26x4cm, about the size of the average pocket in a pair of cargo shorts. Because it’s rectangular also you can easily stack them up in a gig bag too.

But, most importantly, does it work?

When you first extract the stand, in all honesty, it does feel a little flimsy. However, when you put a guitar on it, it does becomes far sturdier. It will support both electric and acoustic guitars, thanks to a little yellow clip on a spring that an acoustic will sit on, or an electric will sit behind.

There are rubber pads underneath that stretch the entire length of the stand, so it doesn’t slip. On the whole, it seems like a useful sturdy design. There is a slight wobble forwards and backwards, which initially is a bit unnerving. But actually having used it a few times now, there’s not a high amount of movement and there’s never been a situation where I’ve been worried about a guitar toppling over.

Saying that I’m not sure I would risk using the stand in particular gig scenarios. I’m thinking rowdy pubs, or on temporary staging at small festivals. Events which, as those who have played them know, tend to have a ‘little play’ in them. In all honesty, I’m sure it would operate just fine, but that little wobble just puts me off a bit.

However, certainly for practices, it’s a godsend. I’m in a couple of bands, one of which I use a couple of acoustics, another a couple of electrics and an acoustic, and having to lug around multiple awkward guitar stands is a pain. For this, the GS200B is exactly what is required.

The only other issue I’ve had with it is that my main acoustic guitar is a Brian May Rhapsody, which has an unusually thin body, which doesn’t sit great in the ‘acoustic mode’, but is slightly too wide for the ‘electric’ mode. The result is that it’s lent back slightly further than I would like, but the stand still holds it well.

In summary, these stands, for what they are, are really, really good. Ultra-portable and reasonably sturdy, they do the job and do it well. My only reservation would be using them at rowdy gigs or gigs with temporary stages or on the ground. But for practices and smaller gigs, they are just perfect.