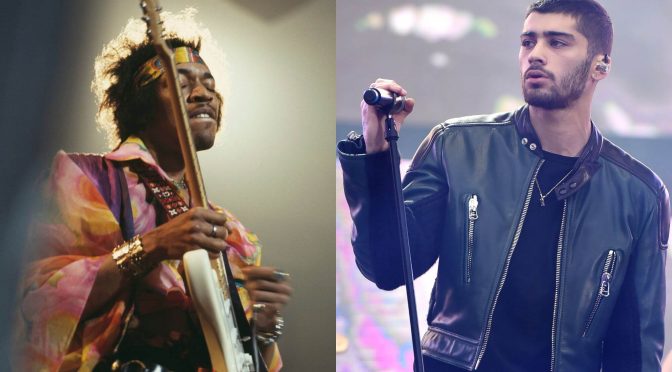 It seems that a posthumous collaboration between One Direction’s Zayn Malik and guitar icon Jimi Hendrix is just around the corner, with a new teaser being shared online.

R&B chart-topper and former One Direction member Zayn Malik is set to release a new version of a Jimi Hendrix track later this week, hinting at a collaboration with a new Instagram post.

Although details on the collaboration remain scarce, the collaboration is likely a new rendition of the guitarist’s track Angel – which was released after Hendrix’s death as part of the 1971 album, The Cry Of Love.

These rumours come after both Jimi Hendrix’s and Zayn’s Instagram accounts shared the same brief video, which contained audio of an excited crowd and the track in question being sung by Zayn Malik, albeit performed with slightly different phrasing.

The video also shows both artists’ names written in the same font, fading out of focus, and includes the detail of a feather falling from the top of the screen – further hinting that the ‘collaboration’ will be of the lesser-known track Angel.

The updates, posted yesterday (22 November), both write the same simple caption of “11.25.22”, suggesting that the upcoming release will be released this Friday – just two days before what would have been the guitarist’s 80th birthday.

The project marks Malik’s first time venturing into the rock genre – previously, he has been firmly fixed in the pop and R&B world, collaborating with artists including Taylor Swift, Sia and Nicki Minaj in the time since leaving One Direction.

Elsewhere, other artists have also been celebrating the musician’s life earlier this year. Back in June, Grammy-winning blues guitarist Kingfish performed the iconic track Red House atop the musician’s last known address, the Hard Rock Hotel in London. Find footage of the event (shared by Guitar World) below.