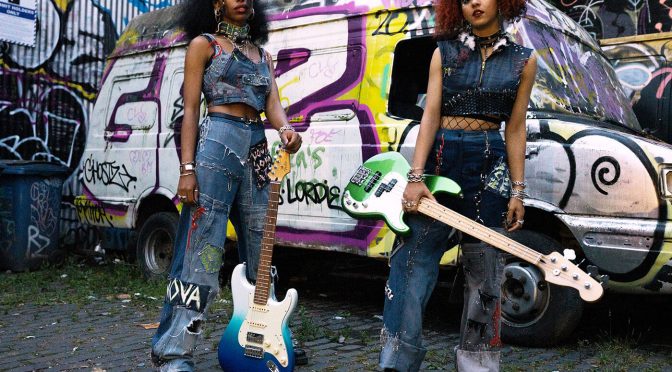 Coinciding with the launch of the new Player Plus range, Fender is set to be the first major guitar brand to make a leap onto the rapidly growing video-based social network TikTok. The company is doing so with the help of UK rock duo Nova Twins, who along with Blu DeTiger, Hannah Dasher, Gabriel Garzón-Montano and The Destroy Boys, will be showcasing the new guitars on the platform.

It’s hard to overstate the impact of TikTok on the world of music since it became a pandemic sensation, but that doesn’t mean it’s only pop megastars (and sea shanty peddlers) getting their start through the app. It’s home to a thriving scene of young musicians creating the next generation of guitar-driven music and – importantly – a lot of them grew up as modern streaming was making a wider range of music more instantly accessible than ever before.

This makes Nova Twins a great fit for the launch – formed of Georgia South and Amy Love on bass and guitar respectively, they’ve got an unmistakable style and energy, drawing from a massive set of influences to create heavy, intoxicating music. With the help of a lot of pedals, the pair’s guitar and bass riffs conjure dubstep as much as they do metal.

We caught up with the duo ahead of the launch to get their thoughts on TikTok, the Player Plus guitars, and if we can finally find out what’s on their pedalboards (spoiler – we can’t).

What were your first impressions of the new Player Plus guitars?

Amy: “Well, I’m playing the Strat, which is very different from a Mustang [Amy has previously played Fender’s Player Mustang 90 – Ed]. In terms of pickups, there are single coils and a humbucker in the Strat, and P-90s in my Mustang. The scale is different, the neck is different. But they feel great. We love the weight of them. The finish is very cool – it’s just different from what you normally see. I’m super excited for it to be on the road with me.

Do the active pickups interact well with your pedalboard?

Georgia: “So an active bass with the pedals isn’t always the best. Sometimes it means there are really cool glitches, but sometimes it just can’t react with them. But with the Player Plus bass, you can switch it to passive – which is great, because you can have the option of both.”

Amy: “With the Strat, I’ve felt like it hasn’t worked any differently with my pedals. Both the single coils and the humbucker. But that’s just me, my personal experience with it. The good thing is the choice – you’ve got so many different kinds of tones and stuff that you can really experiment with it.”

Are you still keeping the contents of your pedalboards under wraps?

Georgia: “We like talking about what kind of sounds we like, but we still keep our boards secret!”

You spoke to Fender about the massive range of influences that came together for the Nova Twins sound, from Skrillex to Kate Bush. What was it like bringing those influences into the heavy rock scene?

Georgia: “We just try and be honest. You’ve gotta be real – we did listen to Destiny’s Child, we do love 90s R&B, and we do love hip-hop, rock, electronic music. That’s what made us. Even if you think it’s cringe or not!”

Artists are mixing genres together more than ever, and a big melting pot for that is TikTok. What’s the significance for you of Fender being the first big guitar brand to establish itself on the platform?

Georgia: “Lil Nas X’s attitude is definitely punk rock! There’s a big rock and alternative scene on TikTok too, you can go on and find people playing crazy distorted bass and guitar. The audience is there for it. If you see the number of likes on that stuff, the new generation is wanting that.”

Amy: “Fender has been so, so great. We noticed it early on, there was such a shift in diversity, and this is a part of that. You associate so many guitar and rock brands with old white men who leave angry comments when they see anything different. The great thing about Fender is you feel represented no matter who you are – I mean, we certainly did, seeing people like Melanie Faye demo guitars, and so many other women and women of colour. It’s just a brand for everyone. And that’s really important for us going forward.”

Now with heavy music diversifying its influence, are you seeing that reflected in the wider scene’s demographics?

Amy: “I mean, we were just at the heavy music awards yesterday and there was great representation of women on the lineup, it was a very diverse crowd. We just thought: ‘That’s how rock shows should be’. It was great to be in that. When we first started out – it wasn’t. It was just nothing but white men. We’d be the token women on the bill. You just think, that’s not good enough.

“But it’s so nice – we’ve obviously been fighting, and people before us, and before them, all the riot grrls, X-Ray Specs and Bikini Kill, that first wave, and now we’re seeing the results from it. Now riot grrl comes in so many different forms, shapes, sizes. It doesn’t really matter! It’s a really exciting moment in music, heavy music especially. It’s also making this comeback.

“Rock music, that’s what people go and buy tickets for, and festivals need to start bringing up the new artists so they can become the new headliners. So it’s not just regurgitating the old headliners. I mean, I love KISS, but they do a lot of headline slots. New talent needs to grow so rock can survive.”

What was it like when you were starting out?

Amy: “Because we came up through the live scene, people saw us and thought, ‘Well, this obviously isn’t a rock thing because these are two girls dressed in pink, green, blue…’ they didn’t want to fucking know! But when we played, and people would actually see it, we’d get booked for other shows. That’s how we came up – people had to see us play to believe it. There was definitely a preconception because of our image, people didn’t think we were gonna turn up on stage and play gnarly riffs or scream the house down. People would assume we’re hip-hop or R&B singers, or just dancers, even.”

Georgia: “Even dressing colourful – at rock and metal festivals where everyone’s wearing black, you turn up in a bright colour, people don’t take you seriously. But it’s been amazing to see – there have been a lot more women on those bills. Our stage at Reading Festival was full of amazing women slaying it, and looking colourful. It was a refreshing way of seeing rock.”

Amy: “There’s been a lot of change in the side stages and the tents. We need to get more diversity on the main stage now, because it’s still a boys club there.”

What changes have you noticed in the world of gear?

Georgia: “I think a lot is changing in the bass world. Basses always used to come in a tiny amount of colours, when I was young and looking for my first bass it ended up being the Westone because it was the craziest thing I had ever seen, red and covered in zebra stripes. But when I was looking, I didn’t see much that felt like me – everything was either black, white or sunburst. But now – I mean, my new Player Plus is Metallic Green and it’s gorgeous.”

Amy: “To some people, it might be like, ‘Oh, you know it’s not about the colour’ but it’s a part of an aesthetic – us as a band, it’s really important how we write the tunes and perform them, a lot of detail and precision goes into that. But we also do the same with our outfits that we’ve made ourselves, and it should be reflected in the gear we’re playing, too. It’s important for people to have the option for it if they want it.”

Georgia: “Going into guitar shops, I just remember there being thousands of guitars and then one tiny bass room at the back with around three on the wall – like, ‘Oh great, I guess these are my choices!’”

Do you think bass is becoming more of an instrument for self-expression the way guitars are?

Georgia: “There used to be that stereotype of, ‘Oh, I don’t want to play bass in the band… but someone’s gotta do it,’ you know, getting demoted to the bass player. But now, I feel like bass is becoming cool. And I’m definitely trying to fly that flag.”

Amy: “It’s just an exciting time for a lot of changes. I think we started out being quite cynical about the industry, just because of our own experiences but now it’s really cool to see the positivity and change that we’ve been wanting to see since we started. So it’s nice to see that other bands who’ve been working for years and years getting recognition.”

Now that you’ve come out of lockdown and are hitting the road, can you tell us about any new Nova Twins releases in the works?

Georgia: “We’ve written loads of new music and been recording but we don’t want to give anyway. We’re still sticking true to not using any additional synths on the track, we still wanted all the sounds to come from the guitars and pedals – even if there is an extra layer, it’ll be made of those crazy sounds… [to Amy] what else can we talk about?”

Nova Twins head on tour with Bring Me The Horizon on 20 September. Grab tickets here. For more information on the Player Plus range, visit fender.com.

The post “You associate guitar brands with old white men who leave angry comments”: Nova Twins on changing guitar for the better appeared first on Guitar.com | All Things Guitar.