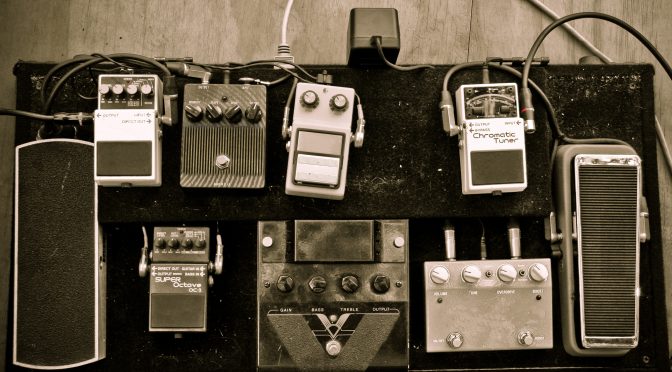 I saw a variation of this question on Facebook and it got me thinking. Pedal nuts often claim that there’s nothing new under the sun, that all pedals are copies of other models, that nobody is doing anything original anymore.

Taking things further, some say that iterative improvement is a form of innovation and better than originality, that they do not believe that originality exists anymore. I have seen the same arguments applied to guitar design, to amp design, etc. So which is it, and does it matter?

Most businesses would love to create a product that has a disruptive influence. Apple have proven themselves to be the king of this sort of market domination in the tech field. The iPad, for instance, was widely mocked upon release but created a new genre of gadget that every other manufacturer would copy.

While this level of originality hasn’t been seen in the pedal market for a long time, that’s probably because, at this point, pedal design is very mature. There are only so many things you can do to a guitar signal and have it remain musical. The closest thing to market disruption in recent years is guitar modelling, with the likes of Line 6 blazing a trail for the rest to follow. So does that mean the best we can achieve is iterative innovation? And where does that leave those trying to create new circuits?

It’s often said that guitarists are conservative in nature, favouring tried-and-tested tones at the expense of carving their own path. This may be true in some cases but things are slowly changing. This is partly due to innovation in the guitar market, which now offers extended-range guitars and the ability to achieve more sounds from instruments. Crucially, though, the crossover between the pedal market and the modular synth market has expanded the requirement for designers to create new and interesting effects. Brands such as Chase Bliss, Hologram Electronics, Rainger, Empress and Old Blood Noise Endeavours have been creating epic, original crossover pedals that are rightly taking the market by storm.

You could argue that all pedals are based on those that have gone before. But that’s lazy, especially given what’s occurring within the market. Lots of pedal designs are innovative, lots are original, and both matter to guitarists who want to enjoy their instrument.

The reason some original design pedals are dismissed as ‘non-original’ or based on others is that it justifies wholesale copying/cloning of other designs. It’s a form of engineering ‘whataboutery’. I understand the need to do it: businesses exist to succeed and sell products, and there’s a halo effect that comes with being known as a purveyor of originality and innovation, rather a brand dealing purely in iterative design.

With Apple, market disruption has always been their thing. But analyse their modus operandi and you’ll see originality is not high on the traits they are associated with. They are the biggest company in the world but they are never first to market with an idea. They are known for repackaging – iteratively improving all facets of a technology before enhancing the ergonomics of a device so that their release becomes arguably the perfect version on the market.

There are plenty of pedal companies that are succeeding by using this business model, and they have huge market share. Crucially, though, this drives demand for the whole pedal industry, at all price points. It’s a positive thing overall, even if it’s a difficult pill for engineers to swallow.

So what am I saying? All approaches are valid and, if a musician is inspired to make music or enjoy themselves (ideally both), then the results are great. Now I’ll get off the fence and suggest the following: go out of your way to seek out the originators, the people taking risks to do things that others can’t/won’t. These are key people in the industry. Without them, new things will never come about and companies with the resources and market share to sell “iteratively enhanced” pedals will have no foundation upon which to build.

The post When it comes to pedal design, are innovation and originality linked? Adrian Thorpe investigates appeared first on Guitar.com | All Things Guitar.