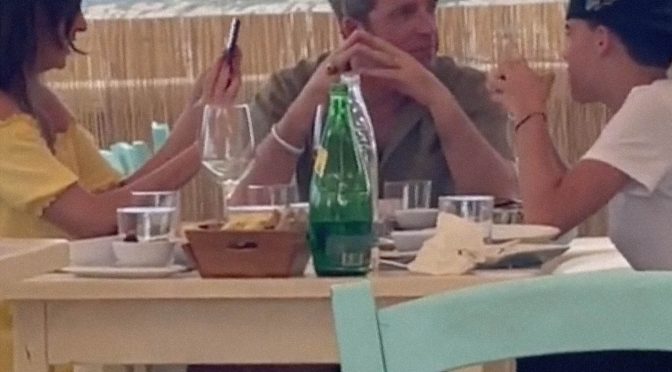 It’s a well-known fact that rockstars can find it difficult to escape their fans, but not often do they have to endure their most well-known songs sung to them— or rather, at them— while trying to enjoy a quiet meal on holiday. That’s exactly what happened to Noel Gallagher while eating in an beachfront Ibiza restaurant with wife Sara MacDonald and his son, as captured by a video shared on TikTok that has since gone viral.

READ MORE: Noel Gallagher on being branded “an enemy of the people” by China for playing Tibetan Freedom Concert: “I’d forgot I’d even done it”

In the video, customers can be seen singing and clapping along to the song as it blares out over the venue’s sound system, with others filming the trio’s reaction on their phones. MacDonald also produces her phone to document the cringeworthy moment.

Tiktok user melisse2211 posted the video with the caption: “’Noel Gallagher from Oasis in Ibiza!!! Everyone was singing their song. I think he was a little embarrassed hehe.”

See it below, but be warned: it makes for quite awkward viewing.

Gallagher shares two sons, 11 and 14, with Macdonald. He also has a daughter, 22, with ex-wife Meg Matthews.

“Cute but a little embarrassing for him trying to have a quiet dinner..” Commented one user, while another said, “even I felt uncomfortable… just like when they sing ‘happy birthday’ to you at work.”

It’s not the first time such an event has taken place at the restaurant in question, however. In fact, it would seem it’s a common occurrence at the venue. melisse2211 commented that the same thing happened to German DJ Timo Maas when he came to dine at the restaurant. “Actually that restaurant does the same with the artists that arrive,” she wrote. “Timo Maas arrived before and they played his Depeche Mode remix.”

That moment was also captured on video.

The post Watch: Noel Gallagher cringes as Wonderwall is sung to him by entire restaurant appeared first on Guitar.com | All Things Guitar.