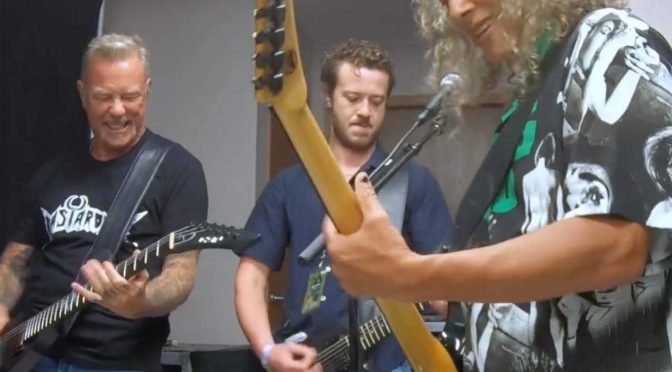 It’s not just Running Up That Hill that has seen a resurrection since the release of the most recent series of Stranger Things, as Metallica’s 1986 single Master Of Puppets has shot its way back into pop-culture thanks to Stranger Things star, Joseph Quinn.

Quinn was lucky enough to pay a visit to Metallica backstage at Lollapalooza 2022, where he chatted with the group about the revival of Master Of Puppets, before partaking in a jam session with the band.

Meeting Quinn, the band praised the actor for his dedication to recreating the track: “Thanks for doing it justice, by the way, you definitely did”.

After playing through Masters Of Puppets together with Quinn, Kirk Hammett exclaimed “You’re hired!”, before Lars Ulrich chimed in with glee that “we’d like to make an announcement that Metallica is now a five-piece”.

Soon after, bassist Robert Trujillo brought out a gift for the actor, presenting him with a guitar that was just like the one used in the finale performance, before getting the band to sign his new axe.

You can watch the full meeting below via Netflix:

After the season finale aired, Metallica issued a statement thanking Stranger Things creators Matt and Ross Duffer for featuring Master Of Puppets within the show. “It’s an incredible honour to be such a big part of Eddie’s journey and to once again be keeping company with all of the other amazing artists featured in the show”.

During their performance at Lollapalooza later that evening, the metal band displayed the video of Quinn’s character, Eddie Munson, playing Master Of Puppets while they shredded on the stage below. Let’s just hope Joseph Quinn was in the crowd to witness the moment!