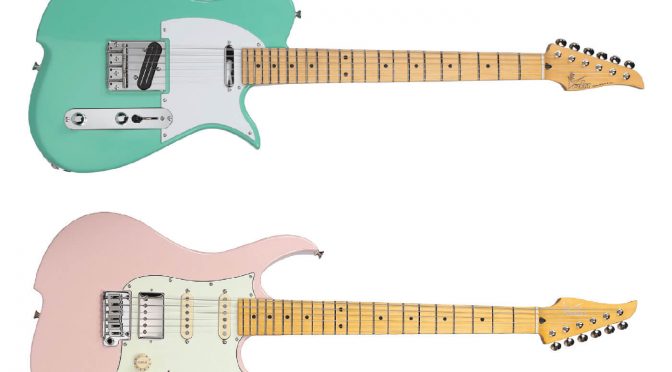 Vola Guitars has released the V3 MC models of its Oz and Vasti models, S- and T-type electric guitars respectively. The updates are focused on modernising the performance and aesthetics of the classic platforms.

Both instruments feature a newly-designed neck heel with a dramatic contour and countersunk screws, maximising comfort while playing on the upper frets. There’s also a brand new C-shaped neck profile design, with a depth of 20mm at the first fret and 21mm at the 12th fret.

Hardware added for both V3 models is also Gotoh through-and-through, including locking tuners.

The Oz V3 MC is Vola’s S-shaped offering, with some modern twists. There’s a tooth-like carve near the lower strap button, more dramatic carves on the cutaways, and a reverse headstock. The body is alder, with a bolt-on one-piece maple neck.

Pickups are an HSS arrangement, being a Vola VHC humbucker in the bridge, and a Vola VS-I in the neck and middle positions.

The Vasti V3 MC is the T-type offering with a similarly modern twist applied to the look. There’s no reverse headstock, but there is the same tooth-like ridge on the body’s rear edge and a slightly offset waist.

There are two pickups in the guitar, a Vola VTS-I in the neck and a Vola VDR-I mini-humbucker in the bridge. Thanks to a push-pull control, this can have a ‘power-boost’ engaged for a fuller sound.

Hear both guitars in action with Vola’s demo below.

The post Vola updates its Oz and Vasti models to V3 appeared first on Guitar.com | All Things Guitar.