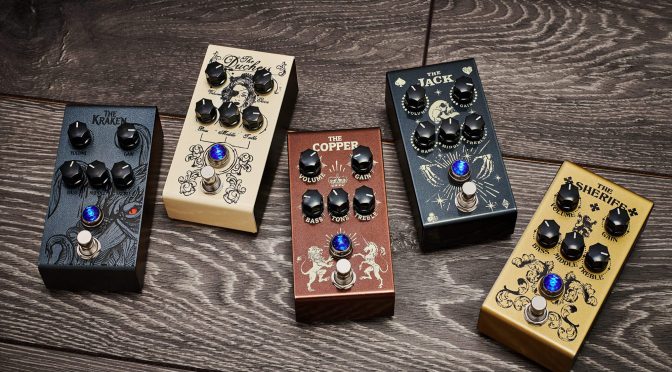 Victory has teamed up with Thorpy FX to deliver a line up of new effects pedals inspired by some of its iconic amps.

The Victory V1 series offers five new pedals, based on the Duchess, Jack, Kraken, Sheriff and Copper guitar amps from Victory itself.

Each pedal has been made in the UK and comes with controls for Volume, Gain, Bass, Middle and Treble. They each offer unique tones that were originally created by the amps, encapsulating them in a vintage, tattoo-esque designed stompbox.

The Sheriff offers tones perfect for the country rock guitarist, “from 60s British blues to 80s hot-rodded tones”, with The Copper delivering the sounds of classic British rock inspired by the VC35 Copper.

And last but not least, The Duchess unlocks that vintage American smoothness ideal for those who want to play with a bit more soul. This one was based on, you guessed it, The V40 Duchess.

You can catch a closer look at them in the video below:

Martin Kidd, Chief Designer at Victory said of the new series, “The idea of a collaboration was something that made a good deal of sense, as we (Victory) were to an extent, venturing into the unknown… At Victory, we have the knowhow, of course; however, being able to make use of Adrian’s (Thorpy’s) experience and the various subtleties of his design ethic, enabled us to better appeal to the player who likes a clean amp platform; getting their various sounds from pedals.”

Each pedal is currently retailing for £199. For further details and specifications, you can visit victoryamps.com.

The post Victory teams up with Thorpy FX for line up of classic amp-inspired effects pedals appeared first on Guitar.com | All Things Guitar.