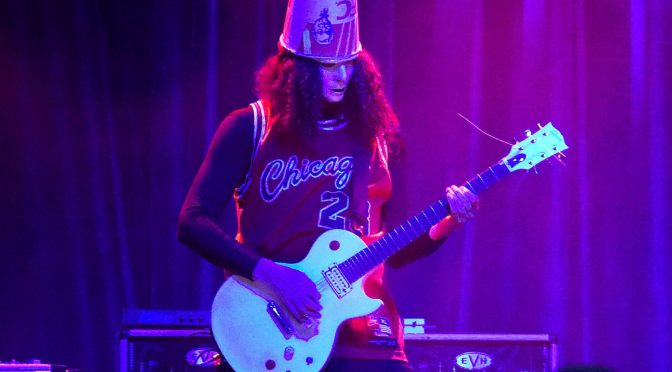 Buckethead has recovered one of his guitars with the help of a fan, after news came through last week that 10 of “the most important guitars of [his] life” were stolen.

The former Guns N’ Roses guitarist issued a statement on his website on 27 July, calling the theft “a tremendous loss” and said that he’ll “never really be able to replace them.”

While most of them are still missing, it seems that Buckethead’s 2008 white Gibson Les Paul has been returned, according to a fresh update on the matter.

Per a post on Buckethead’s official Facebook page, a fan named Taylor Bellemare was the one who helped him retrieve the lost instrument: “I want to thank Taylor for helping to return this guitar to me,” the statement reads. “So many tears with so many emotions. I’m moved beyond. [sic] This guitar is very dear to me this letter is even more. There’s so much good in the world. Thank you Taylor.”

The artist also shared a touching handwritten letter from Bellemare, which reads “Thank you so much for inspiring me to play guitar for the past 15 years. I am glad I could help you get your guitar back. This picture is from 2008 at the Rialto Theater in Tucson, AZ, where you used the guitar.”

“The picture also shows me in the crowd. You gave me an R2D2 toy that you put up to your pick ups. I still have it and it is one of my fondest memories. Hopefully you can come to Tucson to play more Shows. I’d be honoured to meet you. If there’s anything else you need, let me know.”

The post Update: Buckethead recovers one of his stolen guitars with the help of a longtime fan appeared first on Guitar.com | All Things Guitar.