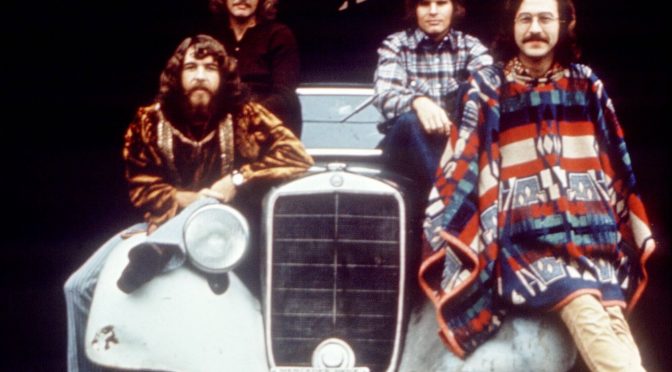 READ MORE: Could Tom DeLonge be returning to Blink-182?

The original 1970 multitrack tapes were restored and mixed by producer Giles Martin and engineer Sam Okell, who have helmed countless acclaimed projects together, such as the Beatles’ 50th-anniversary editions of Abbey Road and Sgt. Pepper’s Lonely Hearts Club Band.

The forthcoming album will also include a documentary concert film Travelin’ Band: Creedence Clearwater Revival at the Royal Albert Hall, narrated by Jeff Bridges and directed by two-time Grammy Award-winner Bob Smeaton (The Beatles Anthology and Jimi Hendrix Band of Gypsies). Featuring a wealth of unseen footage, the film will “take viewers from the band’s earliest years together in El Cerrito, CA through their meteoric rise to fame”, before culminating with their Royal Albert Hall show.

This is the only concert footage of the original CCR lineup to be released in its entirety. The film will roll out internationally on 16 September, with more details coming soon.

Creedence Clearwater Revival at the Royal Albert Hall will be available on CD, cassette, 180-gram vinyl, and digital platforms, with selected retailers offering a variety of exclusive colour variants for the physical copies. Pre-orders are now open.

Craft Recordings will also be releasing a Super Deluxe Edition Box Set on 14 November. The 2-LP/2-CD/1-Blu-ray collection includes the concert on two 45-RPM 180-gram vinyl LPs and CD, as well as a second CD featuring additional music from the film, including formative recordings from the band’s earliest incarnations.

Limited to 5,000 copies worldwide, each set is housed in a 12” x 12” box, with embossed gold foil detail, and includes a reproduction of the original 1970 tour program, a 17” x 24” poster, and a 16-page booklet with an excerpt from Bridges’ voice-over script.

The post Unreleased Creedence Clearwater Revival concert at Royal Albert Hall in 1970 to drop in September appeared first on Guitar.com | All Things Guitar.