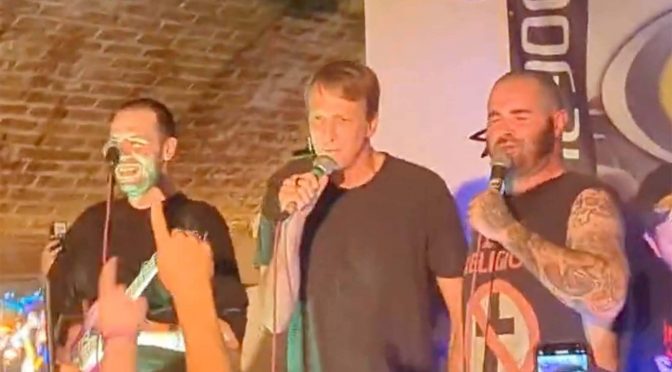 The Tony Hawk’s Pro Skater soundtrack has gone down in history as one of the beloved video game soundtracks of all time, bringing together rock, metal, and punk fans. Therefore, it is understandable that fans, skaters and musicians alike want to come together to celebrate the iconic soundtrack.

As reported by Louder, The independent London brewery Signature Brew received a shock last Saturday (July 30) during a Tony Hawk’s Pro Skater soundtrack celebration with a set by the cover band The 900, as the actual Tony Hawk not only showed up, but jumped on stage to help perform some of the tracks.

Once he got up on stage, the pro skater asked the crowd, “What’s up, London? How are ya?” before greeting some of the crowd personally. “You guys having fun? How good are these guys? This is amazing. Thank you. Okay, okay, jeez. No pressure,” he continued.

“I want to thank you all for coming out, and I want to thank these guys. It’s such an honor that there’s even a cover band for the songs in our games,” he exclaimed before concluding: “I had to join the party. Enjoy. Here we go, you might know this song.”

Performing what Louder notes is “the very first song to appear on a Tony Hawk’s Pro Skater game” the skater and the fellow cover band sang their way through Goldfinger’s Superman to a very surprised audience.

You can watch a snippet of Hawk’s performance below:

Not gonna lie, when we booked a @tonyhawk soundtrack cover band, we didn’t expect actual Tony Hawk to show up in London and cover @goldfingermusic with them. Sorry, what just happened?? pic.twitter.com/K0Hpd2A7bq

There were more shocked reactions from the audience, such as attendee Isabel Davies, who noted that she “went to see a Tony Hawk cover band in a small bar in East London and @tonyhawk showed up and sang some songs. WHAT THE ACTUAL HELL”

So I went to see a Tony Hawk cover band in a small bar in East London and @tonyhawk showed up and sang some songs. WHAT THE ACTUAL HELL. @SignatureBrewE8 pic.twitter.com/xxPSQro2Pt

One takeaway from this, is never turn down going to a set from a cover band, as you never know who you might see.

The post Tony Hawk surprises fans at a London pub by jumping on stage to sing with a Tony Hawk’s Pro Skater soundtrack cover band appeared first on Guitar.com | All Things Guitar.