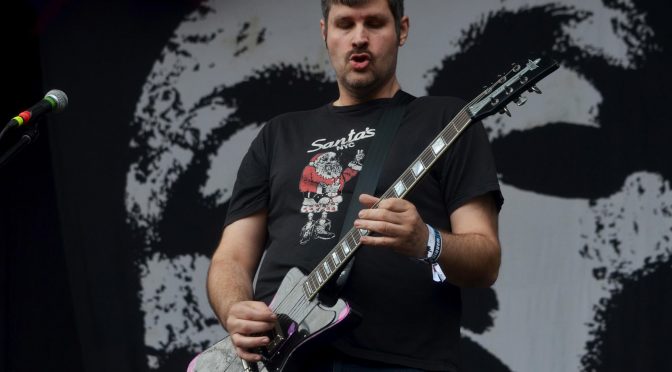 Touring can be pretty dull – a whole lot of nothing generally happens in the yawning gaps between shows. Five years ago a whole lot of nothing was happening as metalcore pioneers Converge linked up with Cave In guitarist-vocalist Stephen Brodsky and goth-rock songwriter Chelsea Wolfe for dates under the Blood Moon banner, reinterpreting the band’s back catalogue in this new, multifaceted image. “You end up just chatting,” Converge guitarist Kurt Ballou says matter-of-factly. “At some point we were all sitting around like, ‘Hey, wouldn’t it be cool if this group of people made a record together?’”

READ MORE: “We’d always joked about how being in a band was like being in a marriage… at one point we went to couples therapy” Deap…

As it turns out, yes, it would be cool if this group of people made a record together. Bloodmoon: I is unlike anything else in the Converge canon. In fact, Brodsky, Wolfe and her co-conspirator Ben Chisholm have scattered the band’s volatile, suffocatingly chaotic building blocks across wide open expanses, permitting thrilling moments of catch-and-release when Ballou puts the hammer down or vocalist Jacob Bannon’s guttural shriek pierces the gloom.

“Traditionally, Converge has been, to use the band’s name, the convergence of the tastes and abilities of four people,” Ballou observes, with the group completed by vocalist Jacob Bannon and the rhythm section of bassist Nate Newton and drummer Ben Koller. “The joy of bringing other people into the mix means that we can explore other aspects of our personal tastes that we might not have without them.”

Ballou, a noted producer whose uncompromising, savagely heavy work has left his fingerprints across the face of modern hardcore, views Bloodmoon: I as a genuine collaboration. He doesn’t think that these songs could have been written in a vacuum by one band or songwriter. It’s a belief underlined time and again by the finished work, which crosses squalling noise and oppressive distortion with desolate passages of relative calm and Wolfe’s consistently haunting vocal refrains.

“As a member of Converge I’ve gotten better over the years at letting go of control,” Ballou says. “I think when a songwriter is new, they tend to have a very strong vision of what they want a song to be. I would get bent out of shape if they didn’t turn out the way I wanted.  The song Coil started as something I wrote. It was basically completely different. We weren’t going to use it, but then Steve took my guitar melody and almost wrote a new song around it, pulling it apart and creating something. He and I sent a lot of stuff back and forth that way.

“I think 20 years ago, 10 years ago, even last year, it was hard for me to hear my song completely different. It takes a certain discipline to be open to the idea of your song having a new life that’s not what you intended. There’s always a risk with collaborations that an idea can become watered down as everyone gets their chance to have a say. That’s sometimes why solo records are so great – it’s a pure vision. But collaboration at its best ends up sounding greater than what it might with only that one vision.”

One major stumbling block arrived in the shape of – no prizes for guessing – the Covid-19 pandemic. With plans to record as a unit at Ballou’s God City studio in Salem, Massachusetts scratched, Bloodmoon: I largely came together remotely. As producer, he pushed hard to ensure that the record retained a human element, and that its shifts in tone and pacing felt like organic manoeuvres pulled off by musicians with a certain amount of chemistry. He suggested, for example, that vocalists singing lead should at times perform lyrics they hadn’t written, with Bannon, Wolfe and Brodsky giving life to each other’s words, creating a patchwork of themes and pushing each out of their usual lanes.

“That was one of the most important goals,” Ballou says. “There was a fair amount of remote recording involved in this project, and it’s a group made up of people who play in other bands and live all over the place. The danger with that is it can sound stiff. Every song ends up being 120bpm and everybody phones in their parts. Instead of sounding like a collaboration it sounds like each member doing their thing at the same time other people are doing their thing. We were all really aware of that potential pitfall when we were writing and recording this music. We did all that we could to make sure it lived and breathed like a real band, and didn’t sound like Converge, didn’t sound like Cave In, didn’t sound like Chelsea Wolfe.”

This dynamic also led to Ballou playing a role that he’s almost uniquely qualified for: filling in gaps in a sound. He has long viewed his approach to music as an almost mathematical endeavour and, when presented with sometimes disparate takes, he readily tuned into this idea in order to get the record to where it needed to be. “Songwriting is Tetris,” he says. “Songs that I have the hardest time with are songs that I can’t make some kind of mathematical order out of. I like to have things orderly and harmonious even if they don’t sound that way. A mix is the same thing. You’re trying to find where everything fits.

“The difference between mixing a song and doing a jigsaw is that you don’t know what all the puzzle shapes are. You have to create a lot of those. I think that’s probably one of my biggest contributions to this record: figuring out the last pieces that were needed and recording those, or creating them somehow. At some point I played every instrument on the record. I didn’t play a lot of everything, but I played all sorts to get us over the finish line. I played the saxophone. I think that’s my role as producer in general, to figure out what else needs to go on and take care of that.”

With Brodsky and Chisholm’s contributions also in play, Ballou also had to take a similar approach to his own interjections. Relying heavily on his God City Instruments Craftsman guitar, a chambered electric of his own design, boasting a single overwound GCI Slugjammer humbucker, alongside a Firebird-esque Wild Customs FireWild and a Balaguer Gaia with an Evertune, he often sat back in order to ensure that he made the right move, not the easiest or most obvious one.

“I was playing less, doing fewer tracks, and also being very dynamic about the choices as to when to play sparsely, and when to play densely,” he says. “There’s not a lot of dense, or athletic, guitar playing on the record, it’s more of a vibe and a mood. There was a lot of back and forth and a lot of editing, a lot of underdubbing, the removal of ideas. We wanted there to be sparseness and contrast so that the songs could take you to different places. I had a wall of amps, probably five different guitar rigs, set up in my live room, and an infinite number of pedals and guitars in the control room. I’d take it on a riff by riff basis and try to dial in appropriate sounds for each section.

“I was doing the same for Steve as well. He recorded the majority of his guitar stuff remotely. I think it was April 2020, so peak quarantine time. Steve was sending me DI stuff with effects printed on them. I could choose a rig for Steve that I felt was appropriate. I try not to overuse the same piece of gear too much. Within a song there are not a lot of times where the lead and the rhythm tracks are the same amp. If it’s a Marshall on the left doing the rhythm then it might be an Ampeg on the right side doing the rhythm. Right now I’m in the process of figuring out how to do that all live. I’ve been spending time with my Helix dialling in patches for both me and Steve so we can get sounds that are pretty true to the album tones.”

This analytical angle of attack might be traced back to Ballou’s work as a producer and guitar builder as much as any shift in musical priorities. While taking spec orders he’d be forced to reckon with the preferences of other musicians, and the equipment presented to him by bands at God City often led him to swallow a portion of humble pie along with a sense of gear snobbery that he’s happy to admit to. Bloodmoon: I works because everyone is all in: it is not a tentative record. That means that they had to roll with the punches and learn from their mistakes in order to move on. It’s something Ballou is getting better at.

“It’s been interesting for me to observe how symbiotic people are with their equipment,” he says. “When people bring equipment to the studio, I always listen to what they have first. A lot of times I’ll think, ‘Well, obviously that’s not going to sound as good as this other thing that I have, so let’s try this other thing.’ But, in reality, for the way this person plays, and their songs, the gear they brought with them often sounds better, even if it’s not objectively good. I’ll chime in if it’s warranted or wanted. The same is true for these records.

“Something that was really interesting for me when I started building guitars for other people, which was about 10 years ago, was that I was always shocked at people’s tastes. But what it made me realise is that taste is in the eye of the beholder, but also that my tastes were not always the best way to do things. It opened my mind up to a lot of other sonic possibilities I wouldn’t have come across otherwise. I’m less rigid now than I was then. One thing I’ve come to recognise recently, and my bandmates would probably laugh if they heard me say this, is that I love being wrong about things. When I’m wrong that means a new set of possibilities have been opened up.”

Converge’s Bloodmoon: I is out now through Epitaph.

The post “There’s always a risk with collaborations” Converge’s Kurt Ballou on teaming up with Chelsea Wolfe for new album, Bloodmoon appeared first on Guitar.com | All Things Guitar.