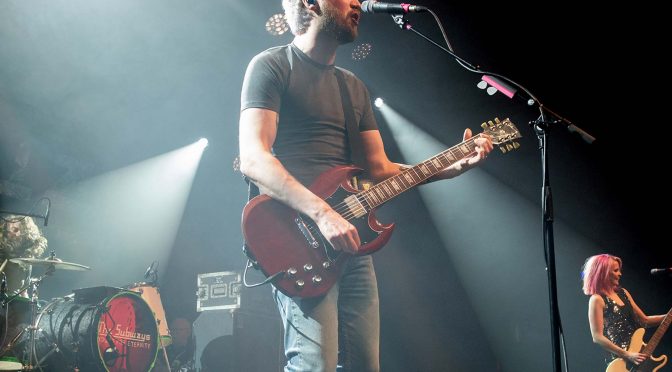 The Subways guitarist Billy Lunn has opened up about the struggles that UK musicians touring Europe are facing in the aftermath of Brexit.

READ MORE: According to a new survey, 76% of UK musicians think Brexit will stop them performing in Europe

In an op-ed piece in The Independent, Lunn has shared his thoughts about the little-reported difficulties that touring bands suffering since the UK left the European Union, something that he’s keenly aware of given that The Subways are more popular on the continent than they are back home.

“As I write, I sit in a venue called Hansa 39 in Munich, readying myself for sound check. I’m apprehensive, because my main amplifier spluttered and eventually refused to work two days into the tour, and I’m now praying my spare amplifier doesn’t go the same way,” Lunn declares.

He goes on to explain that in pre-Brexit times, a quick phonecall to the amp brand’s local A&R representative would have seen a new amp turn up that he could use for the tour and return home to the UK with while he was waiting for his broken amp to be fixed.

Brexit and the end of free movement of people and goods between the UK and the EU has put paid to such convenience – the carnet system now means that bands are obligated to return with the exact gear they left with, right down to the serial numbers.

“The faulty amplifier, like every single item we bring with us, is listed on the carnet, with its weight, type, model number and serial number provided, and must simply come along for the ride,” Lunn explains.

“The carnet expires in 12 months, and it can’t be altered until its expiration date. That means we must make extra sure to list and bring with us spares of everything we use, whilst also making sure that they won’t drastically increase insurance costs.

In addition to the stress of not being able to replace faulty gear on the road, and the expense of having to pay to ship backups for every essential item on the tour regardless of how small or commonplace, the hassle for touring artists starts before they even go on tour – every item that comes on tour has to be catalogued, weighed and the serial number noted for the carnet.

This is a huge logistical pain for guitar players especially, as Lunn notes, it “meant stripping apart pedalboards that had taken us 15 years to assemble, just to get at the serial numbers of every guitar pedal before weighing them separately.”

With the addition of huge delays leaving and returning to Britain, and unprecedented expense and strain put on support bands who do not have the logistical support of an established band, Lunn concludes with a sombre message for the future of UK artists wanting to work in the EU

“Where before there was a sense of freedom, now there’s limitation,” he writes. “It’s ironic, really, given Vote Leave’s campaign messaging. Culturally and economically, however, the arts industry’s suffering is really only just beginning.

The article is part of a wider series called Brexit, 6 years on, created by The Independent to mark the sixth anniversary of the referendum on Britain’s membership of the EU, and share the impact of the vote to leave.

This is not the first time we have heard about the strain that British musicians are feeling post-Brexit, as a study released 18 months ago revealed that over three-quarters of UK musicians don’t see themselves touring in the EU following the news that visas and customs declarations for equipment will be required.

The study, conducted by musician booking site Encore included 452 musicians, and also revealed that 40 percent of those asked said they already had to cancel gigs specifically because of Brexit.

The post “The suffering is only just beginning” Subways guitarist reveals the harsh reality of Brexit for UK bands touring Europe appeared first on Guitar.com | All Things Guitar.