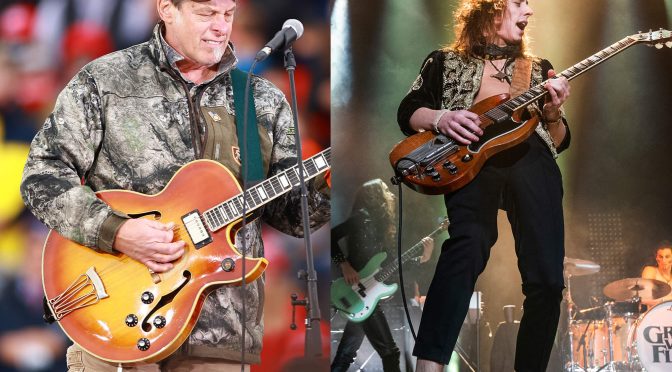 Ted Nugent has praised the attitude of classic rock revivalists Greta Van Fleet, however stated that he doesn’t feel inspired by them – nor any new guitarists from the past two decades for that matter.

Nugent called in to the Talkin’ Rock With Meltdown podcast to chat ahead of his upcoming album Detroit Muscle. He was asked if any new guitarist or band he’d seen in the last two decades had inspired him, to which he replied: “No,” before explaining that stalwarts of the blues-rock and hard-rock that are around today – such as Joe Bonamassa or the Foo Fighters – are “not really new.”

While he might not be particularly inspired by them, Nugent admitted that he admired the energy of the young Grammy-winning classic-rockers. “The Greta Van Fleet guys from Grand Rapids – they’ve got some nice piss and vinegar going on,” he stated. For those unfamiliar with the phrase, it means to be full of youthful, aggressive energy.

But other members of Nugent’s listening rotation are less fresh-faced. “The guys that play guitar in Kid Rock’s band, those guys are killer, and I still listen to Lynyrd Skynyrd with Rickey Medlocke,” he said. “I still wish I could go down and watch Jim McCarty and [former Nugent sideman] Derek St Holmes because these guys are the gods of guitars, and there’s so many of them.”

Nugent also admitted that he’s aware of the scene of young guitarists sharing their playing on the internet: “I get a lot of YouTube videos of young kids that are playing, and it’s very impressive and very encouraging. I wish I remembered all of their names.”

Nugent still has a lot of love for the six-string. “I think the guitar is still the definitive, independent, individual vehicle of expression,” he said. “Because the notes can be bent, and you can play ‘almost’ notes, you can play illegal notes, which I had mastered over the years.”

He added: “When it comes to real guttural emotional primal scream, sexy expression, I’m sorry kids, it’s the guitar, and no, I’m not sorry at all, actually.”

The post Ted Nugent says Greta Van Fleet have “some nice piss and vinegar going on” but doesn’t find them inspiring appeared first on Guitar.com | All Things Guitar.