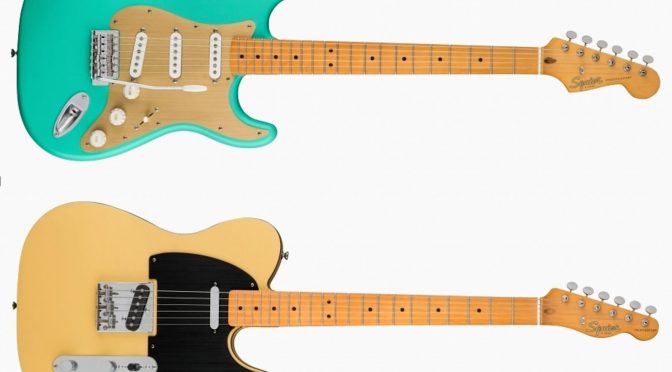 As part of its wide-ranging 40th anniversary celebration, Squier has released a selection of new Vintage Edition models, which notably feature feature aged hardware – a first for the brand.

The collection includes a Tele, Strat and a Jazzmaster, as well as Precision and Jazz bass models too. All of the guitars feature the aforementioned aged chrome hardware, which is paired with satin urethane finishes to bring subtle Road Worn vibes – that certainly wasn’t the case with the previous 40th Anniversary range, the Gold Edition.

Aside from hardware, the body woods are a little unconventional being nyatoh for the Strat, Tele and the basses, while the Jazzmaster is poplar. They come with 9.5 radius maple fretboards with narrow frets and offer a range of suitably vintage-vibed finishes from Blonde and Sonic Blue, to Seafoam Green, Dakota Red and more. The ageing on the hardware isn’t too in-your-face with its worn look either, but more so gives a “dull” appearance compared to your average polished up chrome for the well-used feel.

To keep the aged old-school vibe several of the guitars also sport anodized aluminium pickguards too, which still give that reflective vibe for those who liked the look of their dazzling Gold Edition counterparts, but weren’t completely sold. Overall, the Vintage Edition models should give an alternative option for those looking for something a little more low-key but still with plenty of character.

You can take a further look at the models in the video from Andertons below:

As this line up is limited edition, they’re being sold for a slightly higher price than what we normally get with Squier at an RRP of £499, you can find out more here.