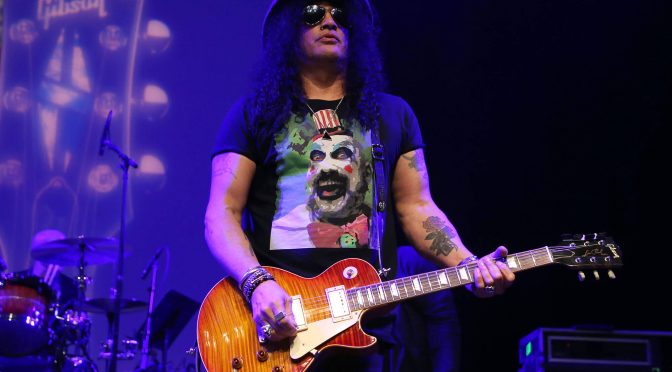 Despite being back on the road together, announcing a new EP and some talk of a new album by the end of this year, Slash has revealed that Guns N’ Roses are yet to write any new material in earnest since he and bassist Duff McKagan rejoined the band in 2016.

In a new interview with Audacy, Slash revealed how no new material is properly in the pipeline yet. “As far as new Guns is concerned, we haven’t even gotten to that point of really in earnest sitting down and writing,” he said. “We’ve been doing a lot of material that’s been sort of sitting around for a while. So that will be a whole focused endeavour unto itself.”

The new tracks on the Hard Skool EP, Absurd and the title track, were taken from the lengthy and troubled sessions for the band’s 2008 LP Chinese Democracy.

Discussing the origins of these tracks, Slash added: “They both have a lot of history. What happened was – Axl has all these songs that he recorded at some point along the way. And so [McKagan] and I went in and re-did them, basically. I wrote my own kind of parts to what else was going on, and just sort of took the drums and re-did everything else.”

Chinese Democracy’s writing and recording sessions were famously dogged by delays, leaks and rewrites. The album began production following the departure of Slash and McKagan in 1996 and 1997 respectively and was originally slated for a 1999 release. When it finally arrived in 2008, it had seen a revolving-door assortment of band members come and go around Axl Rose, complete rewrites and rerecords across 15 studios. Unsurprisingly, this left a huge amount of unused material on the table.

The Hard Skool EP will arrive on 25 February 2022, featuring the title track, their single Absurd, released in August, and live renditions of ’90s tracks Don’t Cry and You’re Crazy from their debut album.

The post Slash says Guns N’ Roses are yet to write any new songs since reunion appeared first on Guitar.com | All Things Guitar.