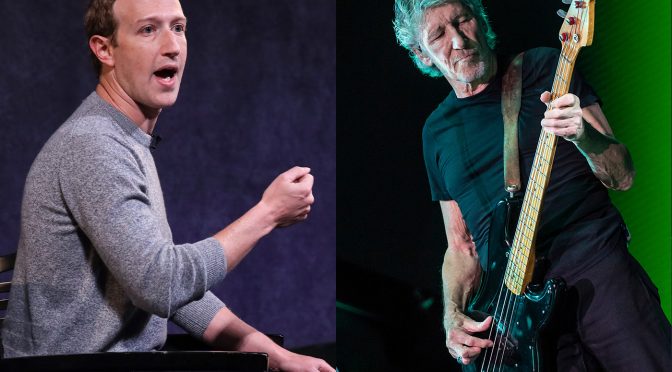 Pink Floyd bassist Roger Waters has criticised Facebook’s founder Mark Zuckerberg, and responded strongly in the negative to Facebook’s request to use the Pink Floyd track Another Brick In The Wall in an advert for Instagram.

Waters was speaking at a forum in support of Wikileaks founder Julian Assange, as reported by Rolling Stone. He read out an email he claimed to be from Mark Zuckerberg to him, requesting the right to use the song.

“It’s a request for the rights to use my song, Another Brick in the Wall, Pt. 2 in the making of a film to promote Instagram,” he said. The letter allegedly said that the team at Facebook “feel that the core sentiment of this song is still so prevalent and so necessary today, which speaks to how timeless the work is.”

Waters continued: “So it’s a missive from Mark Zuckerberg to me, [which] arrived this morning, with an offer of a huge, huge amount of money, and the answer is – fuck you! No fucking way And I only mention that because it’s the insidious movement of them to take over absolutely everything.”

“So those of us who do have any power,” he continued, “and I do have a little bit – in terms of control of the publishing of my songs I do anyway. So I will not be a party to this bullshit, Zuckerberg.”

He went on to call Zuckerberg “one of the most powerful idiots in the world,” and questioned: “how did this little prick, who started off by saying, ‘she is pretty, we’ll give her a four out of five,’ ‘She’s ugly, we’ll give her a one’ – how the fuck did he get any power in anything?”

Waters is referencing Facebook’s early beginnings as a ‘Hot or Not’ style website, rating the attractiveness of Zuckerberg’s Harvard classmates. Facemash, as it was known then, saw Zuckerberg threatened with expulsion for as well as charges of breaching security, violating copyright and violating individual privacy. These charges were, in the end, dropped.

The post Roger Waters calls Mark Zuckerberg a “little prick,” says “fuck you! No fucking way!” to request to use Pink Floyd in Instagram advert appeared first on Guitar.com | All Things Guitar.