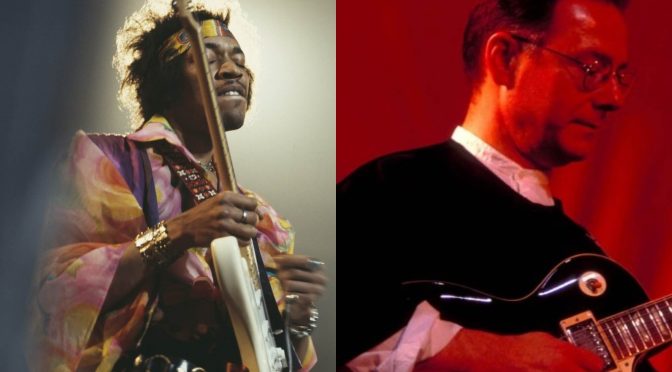 King Crimson frontman Robert Fripp has revealed a compliment Jimi Hendrix paid the band while watching them perform in 1969.

Fripp released a trailer for his upcoming An Evening With That Awful Man and His Manager spoken word tour that includes a clip for Fripp sharing the story with an audience.

Describing his meeting with Hendrix at London’s Revolution club in 1969 after King Crimson had performed there, Fripp shares, “backstage, a man came up to me in a white suit, with his right arm in a white sling. One of the most luminous people I’d ever met. And he came up to me and said, ‘Shake my left hand, man – it’s closer to my heart.’”

Fripp added that he had later accidentally met the sister of original Crimson drummer Michael Giles in a bookshop in 1981, 11 years after Hendrix’ death in 1970. “She said to me, ‘Do you remember the time when Hendrix came to see King Crimson?’” Fripp said. “And I said, ‘Of course I do – it’s my Hendrix story!’ And she said, ‘Do you know that I was sitting on the next table to Jimi Hendrix. … He was jumping up and down and saying, “This is the best group in the world.”’

“In all due modesty, that is one of the best calling cards any working musician is ever likely to be able to present.”

Fripp recently spoken out about his opinions on guitars, amps and pedals, noting that he has “no interest in gear at all”. “Whatever guitar, whatever amp I’m using I’ll get my sound,” Fripp said. “Here’s an example of this. I went to see Herbie Hancock and Chick Corea at Carnegie Hall: wow, breathtaking. Herbie Hancock on the left. They changed places and played, and their sounds went with them. I still don’t understand that. How can that be? It cannot be the sound of the piano changes. The sound of the piano is the sound of a piano, surely?”

The frontman did show an interest in amplification, however, sharing his solutions for both King Crimson setups and for his own playing.