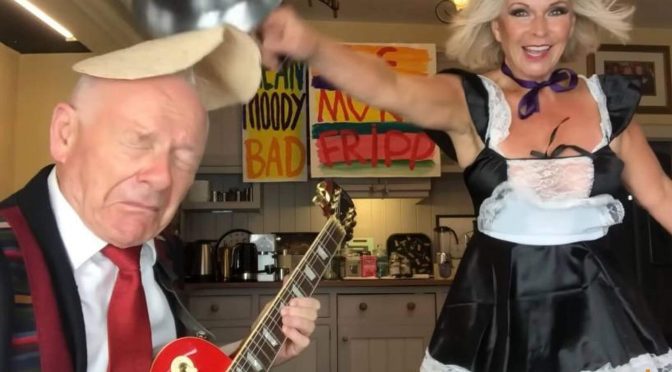 Robert Fripp of King Crimson and singer Toyah Willcox are back with a sprightly cover of Lenny Kravitz’s Are You Gonna Go My Way in the latest instalment of their Sunday Lunch series.

This week’s episode sees resident mood-maker and multitasker Willcox dressed in a maid outfit and flipping tortillas in a frying pan, as she belts to the 1993 rock classic. Beside her, Fripp jams his way through the track on a cherry-red guitar, showing off his killer musical chops even as a tortilla lands on his head. Check out the cover below.

Beginning in 2020 at the height of the pandemic lockdowns, Fripp and Toyah’s Sunday Lunch series has heard them take on a number of rock classics, including Foo Fighter’s All My Life, Neil Young’s Rockin’ in the Free World, Smashing Pumpkins’ Bullet with Butterfly Wings and Billy Idol’s White Wedding.

The duo recently announced that a Sunday Lunch tour is in the works, with venue and ticketing details to be revealed soon.

Toyah will also be releasing her new single, a cover of Grace Jones’ classic Slave To The Rhythm, today. The artist has an intimate connection with the Darlow, Trevor Horn, Bruce Woolley and Stephen Lipson-written track, having originally sung on the demo that was rejected by Frankie Goes To Hollywood before it was picked up by Jones.

“My version will surprise all, it has a connection to the words that suddenly revealed itself as soon as I put the main vocal down and Fripp played. The three of us really are a great musical team, we are very excited.”

The post Robert Fripp and Toyah Willcox take on Lenny Kravitz’s Are You Gonna Go My Way appeared first on Guitar.com | All Things Guitar.