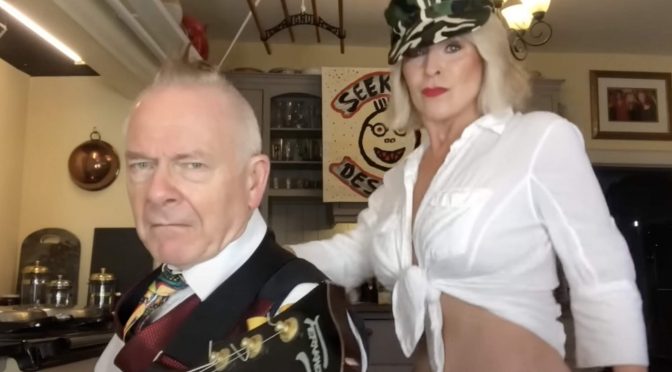 Robert Fripp and Toyah Wilcox have once again covered the band that sky-rocketed their Sunday Lunch covers series on YouTube with a “squeaky” rendition of Metallica’s Seek & Destroy.

READ MORE: Joe Bonamassa quits social media: “I fear I am gonna be provoked one day into saying something I might regret”

The duo covered the band’s hit Enter Sandman back in January 2021, a video which now has over eight million views. Since then, the married couple have performed hits from Pantera, David Bowie, Ozzy Osbourne and many more. Even guitarist Chesney Hawkes has featured on covers for the series too.

This week, Wilcox features two Christmas-themed squeaky toys – turning “seek” into “squeak”.  You can watch the video below:

Seek & Destroy was the ninth track on Metallica’s 1983 record, Kill ‘Em All. The band are set to headline next year’s Download Festival for two nights with two unique sets. Their long reign as metal giants is far from over after they shot to popularity once again following their track Master Of Puppets being used for an epic performance in Netflix’s Stranger Things.

Not everyone’s been a fan of Fripp and Wilcox’s wacky takes on so many classic rock tracks, yet in an interview with The Telegraph, Fripp said of any backlash, “My wife said to me, if all we’ve done in two years is help one person through their bad time, it’s all worth it.” the King Crimson guitarist later added, “At age 76, why should I give a fuck? This is my life.”

Fripp and Wilcox have announced that they will be heading out on a Sunday Lunch Tour next year. Joined by Willcox’s Posh Pop Band, the Sunday Lunch Rock Party 2023 UK tour promises “the legendary artistic twists that both Robert and Toyah are renowned for.”

Tickets are now available at seetickets.com.