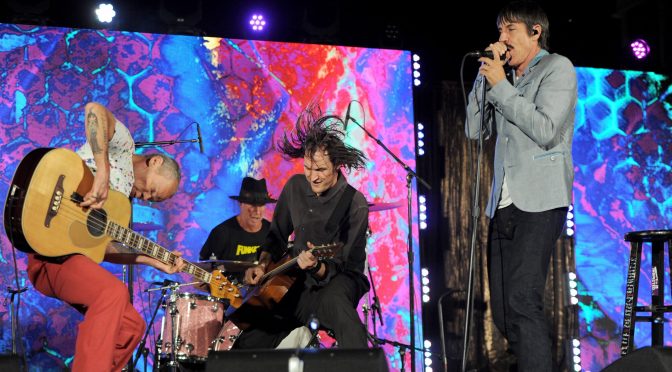 READ MORE: Mateus Asato says that there are only three living guitar heroes: “The impact of the instrument will never be the same as it was”

The 57-second clip features the lyrics “Sailing the Sunset Strip, I’m a bit of a king / Granny would take a trip, I’ll be bending the strings / Got hammers in both my hands, such a delicate touch / They say I’m from Amsterdam, does that make me Dutch?” – a clear tribute to the master shredder.

The song is set to be released on 23 September on streaming platforms. Listen to the clip below.

RHCP’s upcoming Return of the Dream Canteen album is set for release on October 14th and will be another double-length album, following April’s Unlimited Love. It was announced onstage by Kiedis and Flea part way through a recent Red Hot Chili Peppers show in Colorado.

“So, we put out a double record, a few months ago or something like that, and now we’ve got a brand new double record,” says Kiedis,  with Flea exclaiming, “that’s two double-fucking-albums!”

A Van Halen Stage dedicated to the shredder was recently erected in the late guitarist’s hometown of Pasadena. The stage was opened in conjunction with the new Playhouse Village Park in the city where the band was formed 50 years ago.

The stage in the park was initially set to be named after the late guitarist (following a city-wide survey to solicit for suggestions), but the Van Halen family “requested that the stage area be named for the entire Van Halen band” instead.

A rumoured tribute event to Van Halen has been discussed recently involving Joe Satriani, David Lee Roth and Jason Newsted. Joe Satriani has confirmed on the Rock of Nations with Dave Kinchen podcast that he had been discussing “a true tribute to Eddie [Van Halen] and the Van Halen legacy” with Alex Van Halen and David Lee Roth, saying, “I’ve been talking with Alex and Dave for about a year about doing something – a tour, something like that.