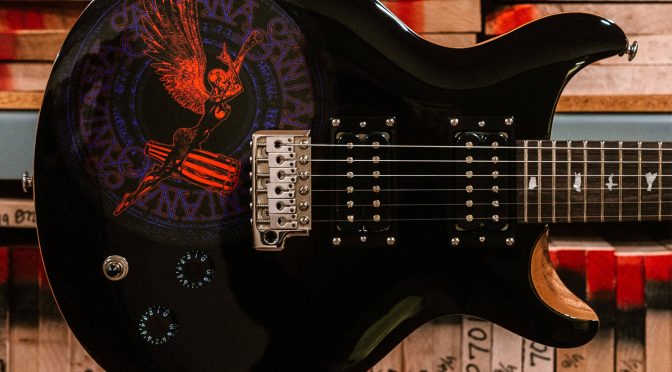 Celebrating the 50th anniversary of the Santana record Abraxas, as well as Carlos Santana’s continued partnership with the brand, PRS has unveiled a new limited-edition SE Santana Abraxas.

The instrument’s run is limited to 1,000 pieces. Construction consists of a mahogany body and maple top, with a 24-fret, 24.5-inch neck with a PRS Wide Fat profile. The neck is mahogany, and the fretboard is rosewood. The vibrato unit is a PRS moulded unit. Electronics consist of a pair of PRS Santana ‘S’ humbuckers, controlled by a master volume and tone and a three-way switch.

The body is finished in black, and is also adorned with a design paying tribute to the angel found on Abraxas’ cover.

Santana commented: “It is an honour to co-join with PRS Guitars in celebrating the 50th Anniversary of Abraxas with a new Santana SE Abraxas 50 guitar.

“Abraxas represents beauty, power, grace and the mystical, and PRS allows you to access this vocabulary at your fingertips with the universal tone that delivers power and clarity, allowing you to find your own voice in your heart’s music.

“We invite you to spread your wings and find your voice with this beautiful instrument!”

Paul Reed Smith added: “Abraxas is a Santana record that changed my life. The songs, the recording quality, and the extraordinary playing and grooves helped shape my love of music and the way I play. Helping to honour that moment with Carlos is a joy for us.”

Each guitar ships with a PRS SE gig bag, and lists for £825. Find out more at prsguitars.com.