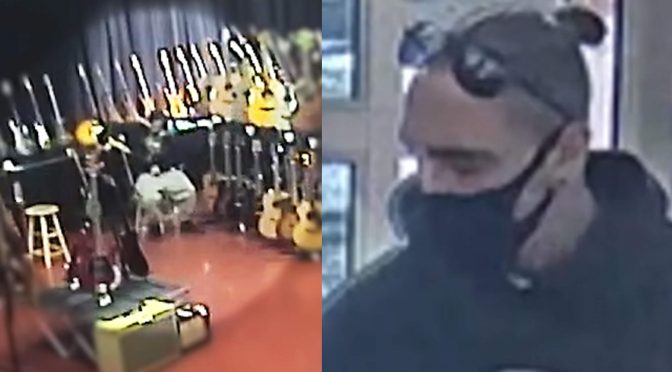 Canadian police are searching for a man who stole an $8,000 Gibson Custom Shop Les Paul by stuffing it into his trousers and walking out of a guitar store.

According to York Regional Police, the incident occurred on 20 December last year. The suspect walked into Cosmo Music, Richmond Hill, Ontario, and took a Gibson Custom Shop 1959 Les Paul off the rack. Security footage of the incident, which has now been shared by the police, shows him having taken a seat on a stool with the guitar. He then angles the guitar downwards, and slowly inserts its neck down his trouser leg. Nearby shoppers either do not notice, or assume that he is locked in an act too intimate to be disturbed.

Once the neck has been concealed – sort of – the suspect then tucks the guitar’s body under his jacket. Despite the low resolution of the security footage provided, the large bulge in the man’s sweatpants is clearly visible. In order to act like a regular shopper, rather than a man who has half an electric guitar in his pants, he picks up a nearby acoustic guitar and begins inspecting it.

Unfortunately, the footage cuts out before we get to find out what he looked like walking around with a four-kilogram electric guitar stuffed down his trousers. He apparently did so confidently enough, as he managed to exit the store without his rather sizable outline being noticed.

See the footage for yourself below. The video shared by police also shows closeups of the man’s face and the guitar in question. Police are also seeking a second suspect, who drove the guitar thief away from the scene.

The post Police seek man who stole $8,000 Les Paul by stuffing it into his pants appeared first on Guitar.com | All Things Guitar.