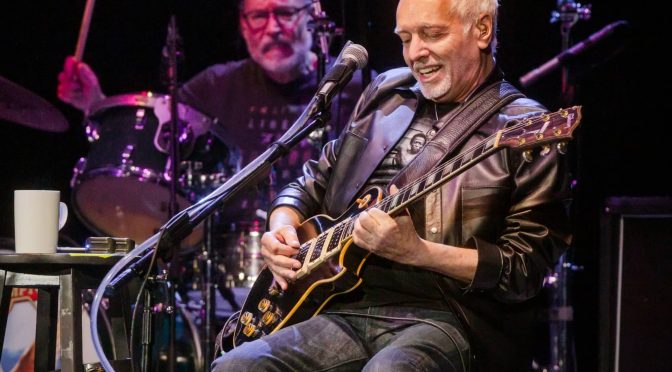 Peter Frampton has officially ended his touring career with the close of his farewell world tour which began in 2019.

The guitarist’s farewell world tour came to its final stop on 16 November at the Mitsubishi Electric Halle in Düsseldorf, Germany, ending a run that took Frampton on a run of over 50 shows across the US and even more dates worldwide following his announcement that he would be retiring from touring due to being Inclusion-Body Myositis.

The setlist featured several covers including Ida Cox’s Four Day Creep and Soundgarden’s Black Hole Sun, with the highlight coming in the form of a 10-minute version of The Beatles’ While My Guitar Gently Weeps to close the show. Turning to the crowd at the end of his set, Frampton said, “Thank you very much. I want to let you know I’m going to keep fighting this, so let’s never say never.”

Watch fan-filmed footage (via geo uli)  of Frampton closing out his touring career with While My Guitar Gently Weeps below:

He told Rolling Stone in 2019 that the degenerative muscle disease that weakens the body’s muscles had led him to hold the farewell tour. “I don’t want to go out and not be able to play well. If I’m going to do a farewell tour, I want to play good. I want to rock it,” he said, though he was forced to cancel the UK/European stretch of his farewell tour in summer 2020 due to the coronavirus pandemic.

Earlier this year in September, Frampton revealed that he would have to perform the remaining shows on the farewell tour seated as the disease had progressed. “Well. . . my legs are not good, and I’ve decided I am going to sit down on these upcoming tour dates in Europe. I can’t stand,” he revealed.

“That would be dangerous for me now, because I get so carried away when I’m playing that I’m liable to fall over (laughs). It’s starting to affect my hands, but not enough yet, so I can still play a good lick.”

Frampton released his instrumental album Frampton Forgets The Word in 2019.