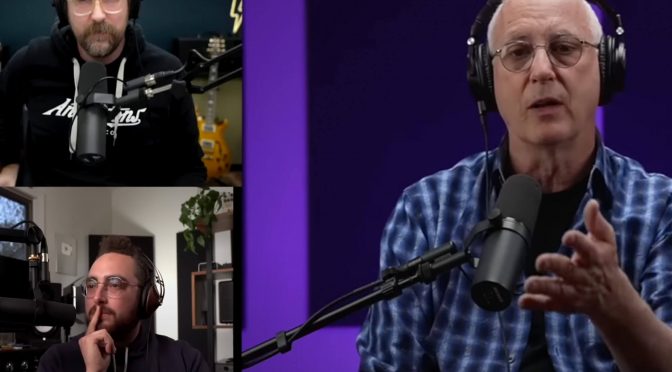 PRS founder Paul Reed Smith has voiced his opinion on why tonewood matters when it comes to choosing your guitar.

In an interview with Dipped In Tone on YouTube, Reed Smith spoke to hosts Rhett Shull and Zach Broyles on why choice of tonewood carries just as much importance as your pickups.

“I found an argument in Germany when I was over there that I think sticks. If the instrument doesn’t matter and it’s only the pickup, then a concert violinist would go up to a Neumann microphone and the violin would not matter at all,” he explained, “It’s his hands and the microphone that’s all that matters – that’s it, according to the internet! What a load of crap.”

He continued to justify, “If you grab any guitar behind you that’s any brand it’s gonna make a vowel sound, it’s gonna make an ‘oo’, an ‘auu’, or an ‘ahh’, or an ‘eee’. A  really good guitar is bright on the bass strings and thick on the high strings, and the pickup picks it up.”

Broyles and Shull nodded along as he concluded, “The idea [that] the pickup is going to ignore that… That red guitar in the rig [for example] is hollow and has notes coming out of it all the time, those harmonics are added to every note you play, is nuts.”

If tonewood is so key, what factors should you look for in good tonewood? Reed Smith concluded it comes down to how it rings and how much it weighs, first and foremost.

Reed Smith launched his first-ever line of effects pedals back in September, and bizarrely named his overdrive pedal “Horsemeat”, he explained of the choice at the time, “I can’t name a guitar Horsemeat – in the pedal business, you can get away with murder.”

He concluded, “We weren’t gonna name it that [originally]. The joke was that it ate Klon Centaurs for breakfast.”

Watch the full interview with Paul Reed Smith below:

The post Paul Reed Smith to those who believe tonewood doesn’t matter: “What a load of crap!”  appeared first on Guitar.com | All Things Guitar.