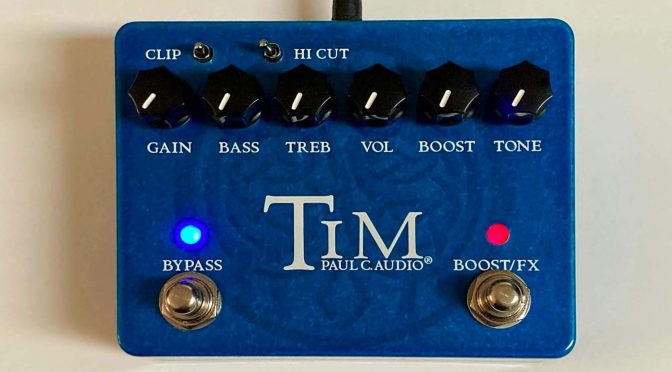 Version three of the revered Tim overdrive pedal appears to be coming soon, as builder Paul Cochrane shows off a new prototype of the dual-footswitch stomper online.

READ MORE: Jargonbuster: Overdrive – how to understand your overdrive pedal

In a Facebook post last week (2 December) Cochrane revealed that he had intended to release the third iteration of the Tim back in 2016, but that the “stars wouldn’t align.” Five years has given him time to work on a new prototype, however, which will soon be ready for release after a few more circuit and enclosure tweaks.

“It’s a shorter box than the old one with all the pots on top and all the jacks on back,” Cochrane wrote in his post. “The three-way clipping switch has the same top and middle settings but with a new, more ‘open’ asymmetrical third setting.”

He added: “A three-way ‘Hi-Cut’ switch is added which helps it sit better with brighter amps/speakers. It’s flat in the middle with -3dB at 5khz, and -3dB at 2khz settings. The FX loop is now tied in with the boost for added flexibility in that mode […] with luck I’m hoping it’ll be ready by the end of winter and not another 5 years.”

Last year, Cochrane partnered with MXR to launch a mini-version of the beloved Timmy overdrive. Unlike the mass-manufactured mini-stomper however, the Tim V3 will be hand-built.

The post Paul Cochrane teases a new Tim overdrive: “With luck I’m hoping it’ll be ready by the end of winter” appeared first on Guitar.com | All Things Guitar.