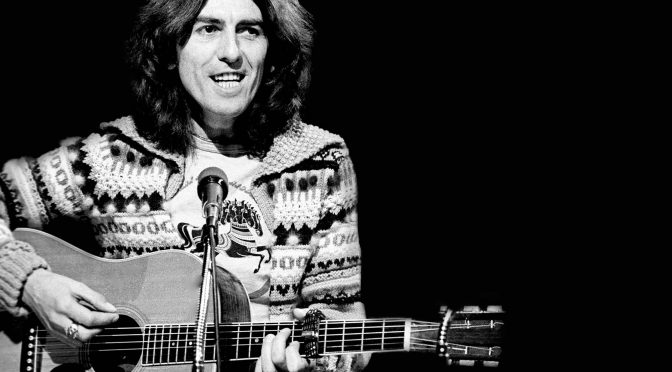 Olivia Harrison, the wife of the late George Harrison, is marking the anniversary of his passing with a poetry reading.

The tribute will be read from Came The Lightening, her book of 20 poems that she released last year to mark the twentieth anniversary of her husband’s passing. The poems analyse themes from losing a partner to the passage of time.

The reading is being held at The University of Liverpool on December 14 and will be accompanied by a selection of photographs and mementos curated by Olivia. The event will also include some never seen images of herself and George.

“I’m delighted to be welcoming Olivia Harrison to campus for what will be a fascinating and moving discussion about her life with George,” says Dr Mike Jones from the University’s Department of Music.

“I previously interviewed Olivia about her and George’s philanthropic work as part of our Yoko Series in the lead up to the opening of our Yoko Ono Lennon Centre. Now that the Centre, with the fabulous Tung Auditorium, is a fixture in Liverpool’s cultural scene, it will be great to chat with Olivia in the fantastic surroundings of the Tung.

This is not the first that that The University of Liverpool has presented its admiration for the Fab Four that put Liverpool on the map. The academic institution hit the headlines last year after the introduction of the master’s programme The Beatles: Music Industry and Heritage.

In more Beatles news, previously unseen footage of the band performing during their sole visit to Japan in 1966 was released following a censorship lawsuit.

The silent, thirty five minute long video not only shows the band performing on stage during their time in Tokyo, but also depicts the musicians descending from the plane wearing matching kimonos and the police operation that escorted them off the plane.

You can find out more about the reading at Liverpool.ac.uk.