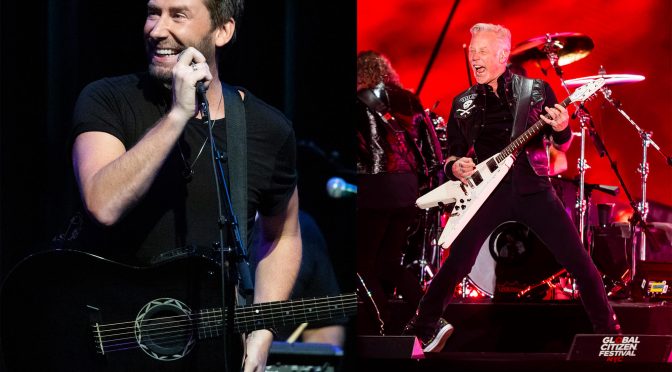 Nickelback’s Chad Kroeger has expressed his admiration for Metallica frontman James Hetfield, naming him as his “rock god”.

READ MORE: Chad Kroeger on Nickelback’s success: “Anybody that thinks that we take this band seriously is hilarious”

Nickelback may well have been meme-d and cast astray from the world of rock before, but the band are back with a brand new album Get Rollin’ which was released last Friday (18 November).

Since the band’s return, it seems that dissing Nickelback could become a thing of the past. Users on TikTok were happy to un-ironically express their love for the band’s new music – some even compared the single San Quentin to the sound of hardcore metal band Knocked Loose.

Whilst out promoting the new record, the Photograph singer expressed his respect for a metal icon of his own – James Hetfield.

In an interview with Johnnie Walker on the BBC Radio Rock Show, Kroeger said, “I was lucky enough to be sidestage and see them play in Paris in front of 70,000 people and then get a chance to go back and hang out with James afterwards.”

He continued, “And he’s not only talented – [an] amazing singer, songwriter, guitar player – but he’s also one of the sweetest people you could ever meet. So, that’s gotta be my choice.”

In another interview with Audacy Kroeger addressed the memes about the band being disliked where he said, “You know, we joke about it all the time. I’m like, ‘I’m ready for the world to hate us again.’ Ryan says that all the time: ‘I think there’s been a softening.’”

Kroeger isn’t the only rocker who has a lot of love for the self-proclaimed “Papa Het”, Justin Hawkins of The Darkness had said Hetfield offered him support when he was struggling with his relationship with alcohol. “He was really kind; he took me to one side and gave me his number and was like, ‘If you ever need to talk to anybody…’ Really supportive, and an excellent person,” he explained in a video on his YouTube channel back in May.

Listen to the new record from Nickelback below: