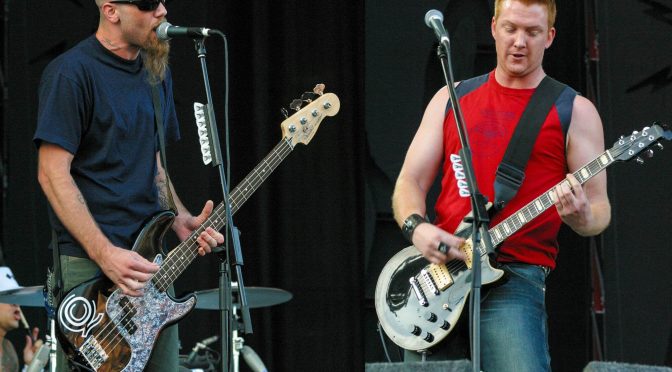 Nick Oliveri has reflected on the time he was fired from Queens of the Stone Age, admitting that the experience “took some time to heal over”.

The bassist was a core member of the band between 1998-2004, contributing to their 2000 album Rated R and 2002’s Songs For The Deaf. In 2004, Oliveri was fired by bandleader and frontman Josh Homme for allegedly being disrespectful towards fans while on tour.

In a new interview with Eonmusic, Oliveri opened up about his relationship with Homme and his departure from the band, saying “You know, we’ve known each other for so long it’s just weird to be at each others’ throats. You can’t force somebody to play music with you. It ran its course just playing music together.”

“We’re still friends, it’s just that we don’t make music together right now,” he explained. “We did so much in a five-year period, in a concentrated period, so much work, that we kind of burned out on each other. So, it is what it is, and he kind of wanted the band to go in a different direction anyway, so he’s taken it there, and that’s where he wants it to go, and it’s great for him. Unfortunately it’s one of those things where… it used to bother me a lot, but it doesn’t anymore.”

“It took some time to heal over some things, and for him too.”

Oliveri shared that the two last met at the funeral of former QOTSA member Mark Lanegan (in February), saying that they “were in good spirits remembering Mark.”

“It was a good memorial for him. We had all the crew there, the whole band was there that was from that era, at that funeral, except him [Lanegan]; he was the only one not there.”

The post Nick Oliveri on being fired from Queens of the Stone Age: “It used to bother me a lot, but it doesn’t anymore” appeared first on Guitar.com | All Things Guitar.