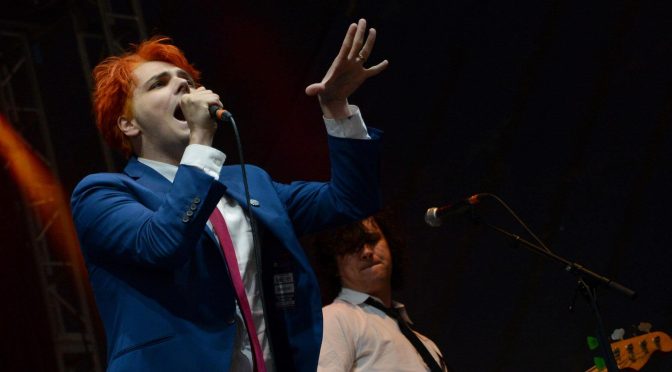 Prepare your eyeliners, for kings of emo My Chemical Romance are back with a surprise new single after eight years.

Titled The Foundations of Decay, the track hearkens back to MCR’s glory days of emo rock angst, featuring frontman Gerard Way’s intense vocals, blistering guitar riffs and a signature MCR slow build that takes you back to 2004. Everything that would make an emo fan shed eyeliner tears, really.

Produced by Doug McKean (who also served as the track’s recording engineer), Way, and the band’s guitarist Ray Toro, the epic six-minute song is the band’s latest music since 2014. It was released without warning and comes as the band prepare to kickstart their long-awaited reunion tour.

After disbanding in 2013, MCR was scheduled for a 2020 reunion tour all through North America and Europe, but the pandemic forced them to put their touring plans on hold. Though the shows were rescheduled for 2021, the dates were pushed back once again due to ongoing Covid-19 concerns.

Now, the band will finally embark on their UK and European tour starting next week in England, with the North American leg of the tour in August. MCR have also booked several festival appearances including When We Were Young and Riot Fest, which are slated to take place in the second half of this year.

Despite the tour, fans were not expecting new music to drop from MCR, whose last release was Fake Your Death in the band’s 2014 greatest hits compilation May Death Never Stop You.

While Way did reveal in an interview last year that he’s been working on songs, details were scant: “[W]hat’s been working lately is sitting with [engineer] Doug, working on the music, and then I’ll just go over to my office — which used to be Marion Peck’s painting studio, and I love that room — and I will sit while Doug mixes, tweaks, edits, programs more drums… I’ll literally sit there and I will write as close as possible to what I think are gonna be either the final lyrics, or at least what I’m comfortable singing at that moment.”

Listen to The Foundations of Decay below.

The post My Chemical Romance returns with epic six-minute song after eight years appeared first on Guitar.com | All Things Guitar.