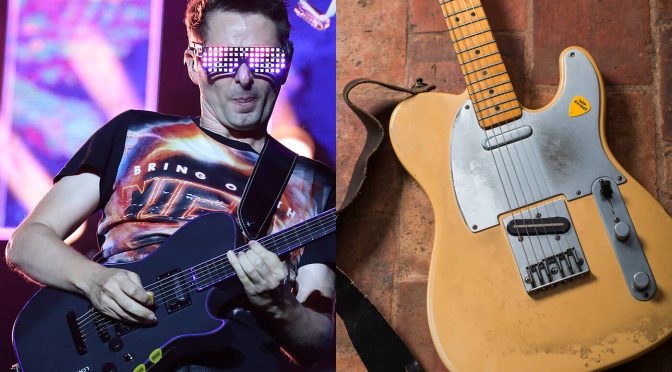 An alternate version of Matt Bellamy’s song Guiding Light, which he recorded on Jeff Buckley’s iconic Telecaster, has sold as an NFT at auction for 13.964 Ethereum ($26,188).

Guiding Light was one of three tracks – plus accompanying digital artwork for each song – that Bellamy auctioned off via Cryptograph as NFTs to benefit Passage Charity, an organisation dedicated to serving the homeless population of the UK.

The other tracks that have been auctioned off are alternate versions of Tomorrow’s World ($27,190) and Unintended ($22,390), both from Bellamy’s recently released solo EP Cryosleep.

According to the auction listings on Cryptograph, all three NFTs were bought by the same user.

Bellamy last year purchased Buckley’s ‘83 Telecaster, which the late singer-songwriter used to record Grace. In an interview with Guitar.com, the Muse star said the guitar could inspire future instruments from Manson Guitar Works, the company he acquired a majority stake of back in 2019.

“We’ve been discussing doing a retro-style or retro-sounding Manson,” he said. “We may actually base some of it on the Jeff Buckley guitar.”

READ MORE: “I wanted a guitar that would lead me down a path of 21st-century music”: Matt Bellamy on Manson Guitar Works

In other Jeff Buckley news, an official biopic centred around life and career of the late musician is in the works and will star actor Reeve Carney as Buckley. The film will be co-produced by Buckley’s mother with support from his estate, and it will be able to feature his music.

The post Muse’s Matt Bellamy auctions off song, recorded with Jeff Buckley’s Tele, as an NFT for $26,000 appeared first on Guitar.com | All Things Guitar.