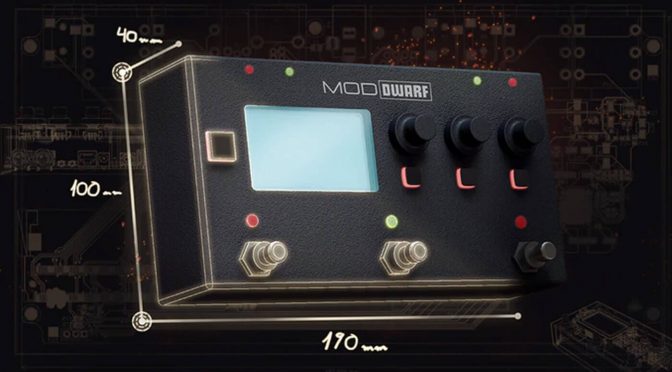 MOD Devices’ Dwarf, its powerful audio and effects processor pedal, has been launched into the retail market. Previously, the unit was only attainable as a reward for Kickstarter backers of the project.

READ MORE: Kickstarter for MOD Devices’ Dwarf is funded in less than 24 hours

The pedal itself is effectively a standalone DAW, with two fully independent audio channels, each with separate gain control, modular signal chain rearrangement and over four hundred free plugins available in the online Plugin Shop.

This is all powered by a quad-core 64 bit ARM CPU running at 1.3GHz, with 8GB storage, and 1GB RAM. Additionally, as its firmware is based on open-source software, user-created plugins are far more accessible – both to install and to create.

The Dwarf’s Kickstarter was launched back in February of 2020, and reached its funding goal of €100,000 in less than 24 hours. In total, it reached €212,667. Until now, this was the only channel through which you could obtain the pedal – however, the brand has launched the product to the wider market – with retailers such as Thomann, Gear4Music and Perfect Circuit supplying the EU, UK and USA respectively. See a full list of dealers and regions here. The pedal lists for €499 inside the EU or $499 internationally.

Gianfranco Ceccolini, Founder and CEO said of the pedal: “The MOD Dwarf represents a big leap forward in our product portfolio while still conserving in its DNA the community spirit from its predecessors. After such a successful crowdfunding journey, it is exciting to receive such positive feedback from first users and reviewers, giving us the confirmation that we are on the right track and that the MOD Dwarf has a game-changing potential in the musical gear landscape.”

Find out more at moddevices.com.

The post MOD Devices’ Dwarf can now be found at retailers across the world appeared first on Guitar.com | All Things Guitar.