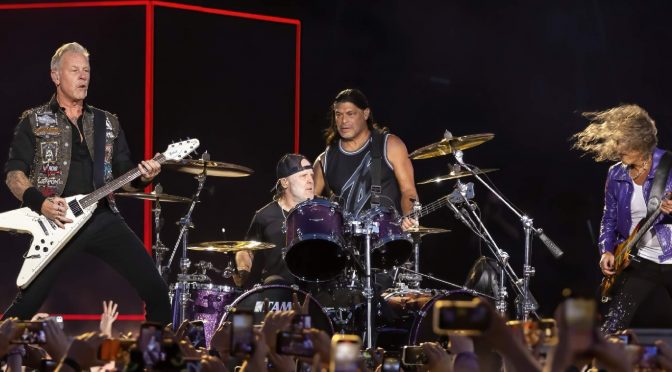 Fans can now buy a selection of Metallica x Stranger Things merchandise on the Metallica webstore. The collaboration is composed of a Hellfire Club raglan, T-shirt, and hoodie, available at $39.99, $34.99, and $59.99 respectively.

“Eddie, this one’s for you,” stated the band’s social media accounts upon announcing the collaboration. “We’re having the most metal meeting ever of The Hellfire Club so we’re scouting out ‘lost sheep’ and outsiders to join. Do you think you have what it takes? Then suit up.”

We’re having the most metal meeting ever of The Hellfire Club so we’re scouting out “lost sheep” and outsiders to join. Do you think you have what it takes? Then suit up!

The band’s iconic track Master of Puppets is currently enjoying a resurgence thanks to the song’s appearance in a pivotal scene from the most recent finale of the Netflix TV series Stranger Things. The epic scene in the Season 4 finale of Stranger Things saw metalhead character Eddie Munson — played by Joseph Quinn — shredding a solo rendition of the band’s 1986 classic Master of Puppets to help his friends defeat the demon Vecna.

The band themselves were elated by the song’s inclusion, calling it an “incredible honour to be such a big part of Eddie’s journey,” adding, “We were all stoked to see the final result and when we did we were totally blown away…It’s so extremely well done, so much so, that some folks were able to guess the song just by seeing a few seconds of Joseph Quinn’s hands in the trailer!! How crazy cool is that?”

Metallica bassist Rob Trujillo also revealed that his son Tye Trujillo, along with bandmate Kirk Hammett, contributed to the version of Master Of Puppets that appears in the series.

“That’s my boy, proud of ya Tye,” wrote Trujillo on Instagram. “Stranger Things finale shredding it on Master of Puppets and big thanks to Kirk Hammett on helping.”