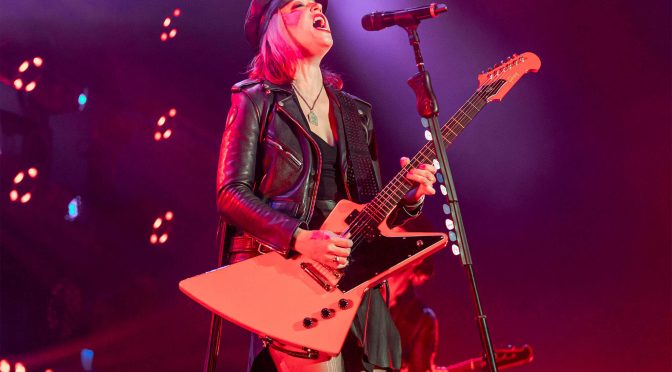 Rumours and speculations were rife last month as the vocalist dropped sparse details on the long-awaited upcoming model, claiming it to be “a different animal altogether”. Now, following a new video released on Gibson’s YouTube channel, fans are granted the first official look at the final design, finally able to see the guitar in action.

Dubbed “the first guitar of its kind”, the latest axe to be added to Hale’s signature range comes in a Cardinal Red finish, donning gold hardware throughout and gold acrylic dot inlays – just as promised by the musician previously.

Specific to the Firebird design, the six-string features Grover Mini Rotomatic tuners, meanwhile the Explorer aspects embed a Stop Bar tailpiece and Tune-O-Matic bridge. Further specs of the new model include the gold rod-equipped ‘70s Tribute humbuckers – both of which are dictated by a master tone knob, pickup-specific volume controls and a three-way toggle.

Speaking with Total Guitar recently, Hale confirmed that planning for the new model began shortly before the pandemic: “I think it was at the NAMM right before lockdown – we were doing some projects with Gibson,” she said. “I mentioned offhandedly that it would be cool to have a Firebird headstock on an Explorer body.”

Describing the inspiration behind the new guitar, the frontwoman reflected back on her childhood heroes, stating that she hopes the new designs will help to inspire a new generation of female musicians.

“The most beautiful thing about what I do now with Gibson is that you get to put yourself up there in a way that, for the generation of young girls that want to get into this instrument, [it] makes the bridge to that dream just a little bit shorter,” she says. “[I want it to be] just like when I was younger and saw Joan Jett playing guitar, or Lita Ford or Nancy Wilson.”

The Explorerbird is available now for $2,799 Further details on the new model can be found on Gibson’s website.

The post Lzzy Hale finally unveils what she’s been cooking up with Gibson – a hybrid Explorerbird Signature guitar appeared first on Guitar.com | All Things Guitar.