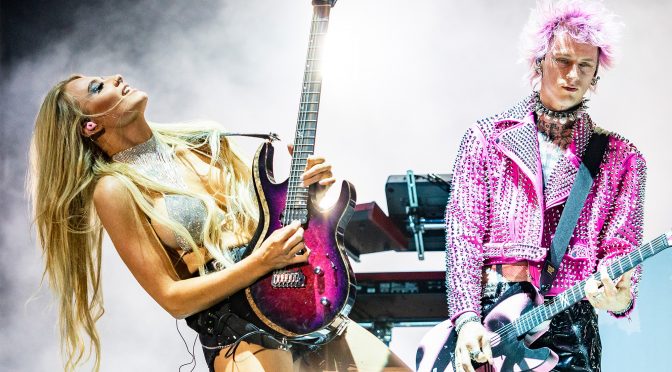 Rock and metal guitarist Sophie Lloyd has announced she will be releasing her first ever studio album, and has dropped the first single, Do Or Die.

The track features vocals from Nathan James of bands Inglorious and Iconic, it’s the first release from her studio album, Imposter Syndrome which is set for release in 2023.

Lloyd has risen to popularity by sharing videos of her guitar skills to TikTok and YouTube – since then she has joined Machine Gun Kelly’s band as guitarist and has recently accompanied him on his Mainstream Sellout tour.

Have a listen to the track below:

In March last year, Lloyd was endorsed by Muse’s Matt Bellamy, who sent her a reimagining of the Origin of Symmetry Manson MA EVO Floyd Rose Sustainic Guitar as a gift. Her debut 2018 EP, Delusions was purely instrumental, but fans are hoping for more vocals on her first full-length LP. In a post to Instagram promoting the single, Lloyd said, “You guys have wanted me to make music with vocals for so long and I have heard you, I have listened.”

In recent years the “#guitartok effect” has encouraged young people, especially young women, to pick up our beloved instrument. A discussion panel was hosted by the Fender Musical Instruments Corporation on 19 July, bringing together TikTok guitarists Blue DeTiger, and April Kae and music managers, Adam Hirsch and Benito Lugo, to discuss TikTok’s influence on the music industry and guitar culture. In the past year, Fender has featured an array of female Player Plus artists on its TikTok account.

An official release date for Lloyd’s debut album Imposter Syndrome is yet to be announced. For the latest news on upcoming music from Sophie Lloyd, keep your eye on sophieguitar.com.