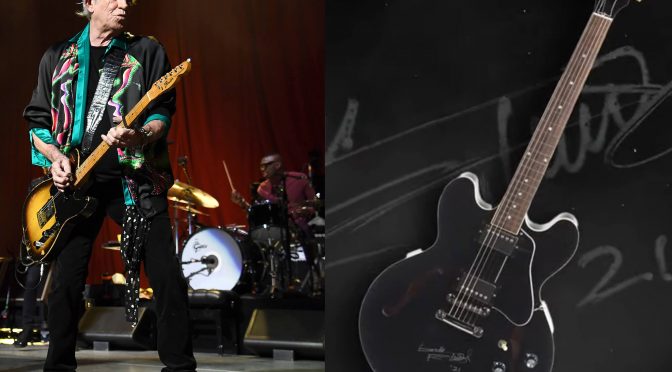 Keith Richards has partnered with “green” NFT platform OneOf, MusiCares and Julien’s Auctions to mint an NFT, which is being auctioned off for charity this month.

READ MORE: Rare interviews with The Beatles going up for auction as set of NFTs

The auction includes both the real Gibson ES-335 and an e NFT  of the guitar. The NFT appears to be a short, 720-pixel-square video of an image of the guitar moving about in front of some smoke. It cannot be plugged into an amplifier and played, unfortunately, however the real guitar is fully functional. Both the real guitar and the NFT feature Keith Richards’ signature, just below the tailpiece.

The NFT is a one-of-a-kind, and has been minted on Tezos, a decentralised open-source blockchain that uses proof-of-stake rather than proof-of-work, therefore reducing the energy cost of minting an NFT.

In English, that effectively means that the value and unique nature of the one-of-a-kind token is based on a hypothetical expenditure of computational power, rather than proof that that power has been spent, known as “proof of work.” This “proof of work” nature of some NFTs is what causes them to be so harmful to the environment, as the electricity required bears a substantial carbon cost. According to OneOf, however, minting an NFT on Tezos produces the equivalent weight of a snowflake in CO2 emissions.

Bidding will conclude on 30 January. The price currently sits at $4,500, with two bids from a starting price of $1,500. Proceeds will go towards MusiCares. See the NFT at oneof.com, and the full lot details at julienslive.com.

The post Keith Richards’ first NFT will be auctioned off for charity appeared first on Guitar.com | All Things Guitar.