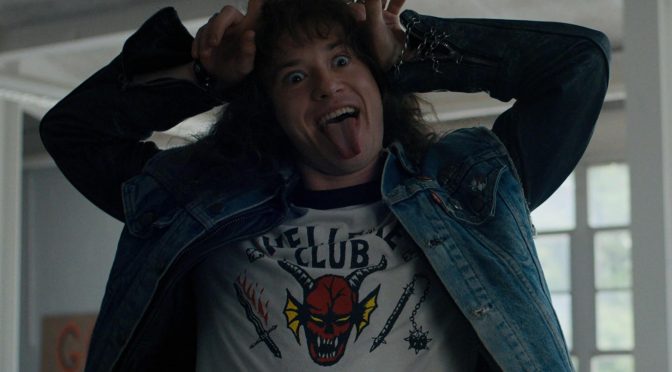 Stranger Things breakout star Joseph Quinn has revealed Black Sabbath and Slayer were among his listening choices while preparing for the role of Eddie Munson.

In a new interview with Metal Hammer, Quinn discussed the bands he listened to to get into the mindset to the Master Of Puppets shredder. “I listened to Master Of Reality by Black Sabbath over and over,” he explained. “Master Of Puppets as well, Slayer…all that kind of stuff. That was my way into that whole world, really. Black Sabbath were my guys, and Led Zeppelin too, but I guess they’re less metal.”

The actor also discussed his guitar heroes, naming two icons as his main influences. “Jimi Hendrix is an obvious one, I was always very enamoured with him. Nirvana were my first proper band obsession – I was obsessed with Kurt Cobain and had all of his posters in my wall. It’s kind of cliché, but it’s true,” Quinn shared.

Quinn has showed off his skills before, sharing a video of himself playing Metallica’s Master Of Puppets rather skillfully back in July. “I played guitar since I was very young, so I was lucky that I had a foundation there,” Quinn said of his connection to the instrument. “But as I said, when I read the scripts, the next morning I went out and bought a guitar and manically started learning Master of Puppets.”

Metallica themselves have called the inclusion of Master Of Puppets in the season finale of Stranger Things an “incredible honour”, adding, “The way The Duffer Brothers have incorporated music into Stranger Things has always been next level, so we were beyond psyched for them to not only include Master Of Puppets in the show, but to have such a pivotal scene built around it.”

The post Joseph Quinn also blasted Black Sabbath and Slayer to prepare for his role on Stranger Things appeared first on Guitar.com | All Things Guitar.