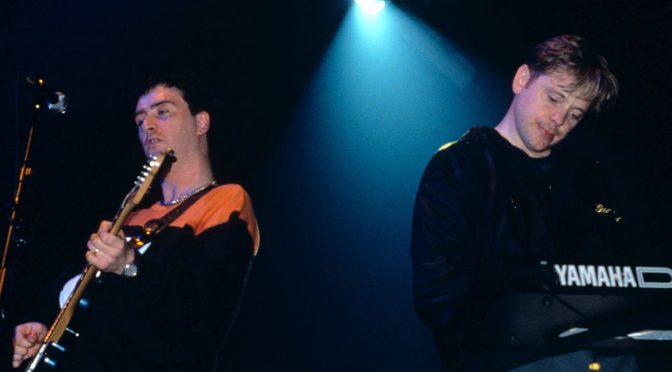 Johnny Marr has spoken about his love for synthesizers and synth-pop, touching on the stereotype of animosity between the post-punk bands and the synth-based bands of the 1980s.

Following his departure from The Smiths, Johnny Marr joined with Bernard Sumner – formerly of Joy Division, then of New Order – to form the band Electronic. Talking to Stereogum, Marr addressed the perception of tribalism when it comes to UK alternative bands of the 1980s, specifically the idea that guitar bands like The Smiths were the “antidote” to synth-pop and new-wave.

“It was all about who was making [synth-pop],” Marr explained. “In the hands of the obvious subjects, 80s technology was vapid. But in the hands of New Order, Cabaret Voltaire, Bobby O, Pet Shop Boys, it was great.”

Marr explained how meeting Bernard Sumner gave him a taste for electronic music, and made him keen to make more: “I was digging it. I couldn’t wait to be working with the machines. I knew the Smiths were never going to make music like Kraftwerk. In my own way, going into that last Smiths record – I’d hired an [E-mu] Emulator II. I couldn’t buy one, they were so expensive then. I’d fallen back in love with David Bowie’s Low.

“I got this Emulator II, and I was thinking, OK, this is a way me and my band can pull ourselves away from this kind of reductive ghetto the music press were trying to create. This anorak indie thing.”

That E-mu Emulator II – a complex sample-based synthesizer – appeared on the last two Smiths records, and laid the groundwork for Marr’s later work with Electronic and further love of synth-pop. “It was a small leap from working with an emulator on those last two Smiths records to wanting to know exactly how a [Oberheim] DMX worked,” he explained. “I became an archetypal guitar player to a lot of people. The archetype doesn’t do that. The archetype stays in the same jacket for 40 years with the same people.”

The post Johnny Marr on branching out into synth-pop: “I couldn’t wait to be working with machines… The Smiths were never going to make music like Kraftwerk” appeared first on Guitar.com | All Things Guitar.