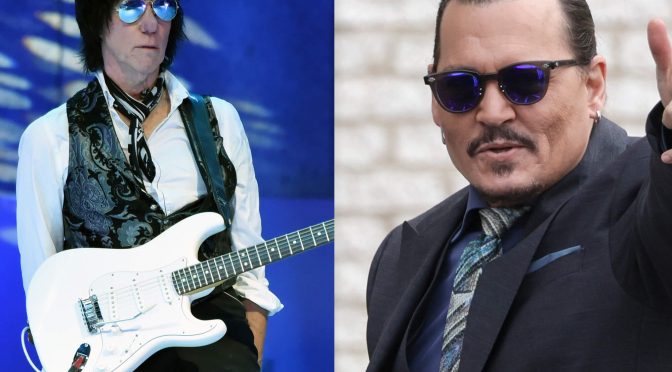 A folklorist has accused Johnny Depp and Jeff Beck of stealing the lyrics to their song Sad Motherfuckin’ Parade from a poem by a prisoner that was published in 1974.

According to a report from Rolling Stone, folklorist Bruce Jackson has accused the artists of directly taking the lyrics for their song from a toast he recorded by prisoner Slim Wilson, a self-professed cheat who was incarcerated at the Missouri State Penitentiary for armed robbery, when Jackson met him in 1964.

“The only two lines I could find in the whole piece that [Depp and Beck] contributed are ‘Big time motherfucker’ and ‘Bust it down to my level,’” Jackson told the publication.

“Everything else is from Slim’s performance in my book. I’ve never encountered anything like this. I’ve been publishing stuff for 50 years, and this is the first time anybody has just ripped something off and put his own name on it.”

Jackson published Slim’s poem in his 1974 book Get Your Ass In The Water and Swim Like Me, among other toasts the prisoner performed. The toast in question, titled Hobo Ben, goes in part, “Ladies of culture and beauty so refined, is there one among you that would grant me wine? / I’m raggedy I know, but I have no stink / and God bless the lady that’ll buy me a drink’ / Heavy-hipted Hattie turned to Nadine with a laugh / and said, ‘What that funky motherfucker really need, child, is a bath.”

Depp and Beck’s Sad Motherfuckin’ Parade appears to include entire passages near verbatim, including the lines “I’m raggedy, I know, but I have no stink” and “God bless the lady that’ll buy me a drink”.

Depp and Beck released their album 18 in July this year following the artists playing a number of gigs together in the run-up to and wake of the verdicts between Depp and his ex-wife Amber Heard. “I met this guy five years ago and we’ve never stopped laughing since,” Beck said of his collaboration with Depp. “We actually made an album. I don’t know how it happened. It will be out in July.”

The post Johnny Depp and Jeff Beck accused of allegedly lifting lyrics from 1974 poem by prisoner appeared first on Guitar.com | All Things Guitar.